How "Once" Managed to Charm Even Me 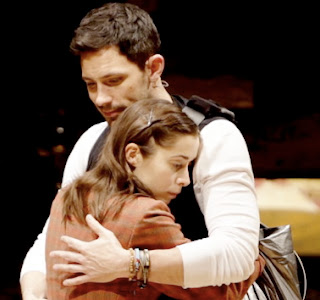 Once, the new musical that opened at the Bernard B. Jacobs Theatre this week, may be the sweetest show to open on Broadway in years.  And I had worried about that.  My theatrical taste buds tend to favor the peppery and nothing I’d heard about the show, which had a sell-out run down at the New York Theatre Workshop late last year, sounded spicy enough. But, to my surprise, I ended up liking the show despite myself—and my taste buds.
Based on the 2006 film of the same name, Once tells the story of a depressed Irish street musician and an upbeat Czech immigrant who, over the course of a week, meet cute, bond over music, attempt to cut a record and try not to fall in love because they are involved with other people.
All the action takes place in Dublin and because I hadn’t seen the film, I went in dreading that all the music was going to be Irish. It isn’t. In fact, the show’s lilting pop and folk-rock ballads wouldn’t be out of place on a John Mayer or Adele playlist.

The one criticism might be that there is a sameness to these songs by Glen Hansard and Markéta Irglová, who starred in the film and based it somewhat on their own lives.  But they’re all good. One, “Falling Slowly” actually won the Oscar for Best Song (click here to hear them sing it).
This time, a prize should go to the orchestrator Martin Lowe. For in John Doyle-style, the show’s music is all played by the actors on stage who strum guitars, violins, mandolins and even play an accordion. Yet Lowe has blended them into a sublime sound that’s both contemporary and totally at home in a Broadway house.
The actors-play-the-instruments thing also works here because, unlike in Doyle’s versions of Sweeney Todd and Company, the characters are all musicians and it makes more sense for them to pick up a guitar or drumstick than it did for Patti LuPone’s Mrs. Lovett to lug around a tuba.
As the wife of a proud member of Local 802, I should be complaining about these interlopers but the players in the cast are all excellent musicians—and they’re fine actors too.
All of the nine adult supporting players get at least one moment in the spotlight and each makes the best of it. Except for Paul Whitty, a burly guy with Bozo-like hair who’s unable to resist hijacking every scene he’s in. There’s also an adorable little girl who just gets to be adorable.
Still it’s the lead players who do the heavy lifting—and they’re adorable too.  Steve Kazee and Cristin Milliotti have been in Broadway shows before but as the whimsically named Guy and Girl, they’ve been given the breakout roles that every kid in the ensemble always dreams of getting.
And they shine in them. Kazee literally sings his heart out (click here to read a Q&A with him) . Meanwhile Milliotti, who seems a little precious at the start of the play, ends up as the show's emotional center.
Among Once's other strengths are the highly-stylized staging by director John Tiffany and distinctive "movement" choreography by Steven Hoggett, the team that created Black Watch, the National Theater of Scotland’s magnificent performance piece about the Iraq War.
As charming as it is, Once is a slight story and it might have turned saccharine in less sure hands. Tiffany and Hoggett aren’t afraid of being theatrical and they create the kind of deeply visceral theater that can’t be truly experienced anywhere else than on a stage.
Speaking of which, the set and costumes have been designed by the great Bob Crowley (click here to read an interview with him).  This time out, he has created an Irish pub so authentic that you can almost smell the Guinness.  Or drink one.  Literally.
The doors open about 20 minutes before the show begins and while the musicians gather onstage to jam on Irish jigs, audience members are encouraged to come up and mingle and to buy drinks at the bar at the back of the stage.
It’s nice to see a show doing things differently and still managing to work its magic on Broadway. Even diehard show queens who worship at the Church of Fosse have been singing the praises of Once so fervently that it could end up the frontrunner for this year’s Tony for best musical.
Which, I have to say, would be sweet in a good way.

Love the music from "Once"! Such a great film. Hope I get the chance to catch it on Broadway. I found a really cool interview with Glen Hansard & Marketa Irglova (stars/writers of the music for the movie). http://release.sonymusic.com/media/release/53514c3e50b9b7dbbac3?catalog=catalog_68

I also loved Once. It felt unique.

I loved the way it unfolded at a leisurely pace.

Steve Kazee and Cristin Milioti complemented each other so well. I especially loved Milioti's Girl, so full of humor and spunk.

The Irish folk/rock score was lovely. And Steven Hoggett's movements were always surprising and different.

Even the small glimpses we got of the supporting characters made them so interesting - the bank manager who's also a musician, and the Czech immigrant who's trying to get a promotion at work. It doesn't take much but we get some insight into their lives.

I was trying to think about why this worked for me when other movie adaptations haven't. I think you're right when you describe it as visceral theater.

I just saw Once in the West End after hearing about its Broadway success. I thought it was amazing too and agree with your comments!
Georgia x

Georgia, I'm glad you got the chance to see and enjoy the show and that it has had such success. Thanks for taking the time to leave a comment. jan