A Great Visit from "The Lady from Dubuque" 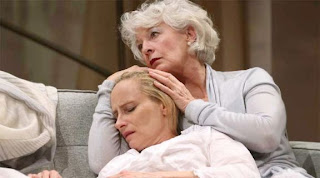 All great playwrights strive to make the people who see their plays think as well as feel.  And with Arthur Miller and Tennessee Williams now gone, Edward Albee is not only our greatest living playwright but the undisputed champ of that game. Right from the start, his plays have insisted that his audiences grapple with the way they think and feel about really tough stuff. So I always find it difficult to answer when people ask me if I’ve enjoyed something by Albee. For his plays are far too discomforting for that.  But I can say that I do enjoy wrestling with them.

The Lady from Dubuque may not be one of Albee’s heavyweights like Who’s Afraid of Virginia Woolf?, Seascape or my favorite, The Goat, or Who Is Sylvia? but this 1980 meditation on dying is still a powerful piece of work and the Signature Theatre Company is giving it a fitting revival in the largest and most lovely of the three theaters at its brand new Pershing Square Center home.
The play opens on a familiar Albee scene: upper-middle class folks are sitting in a handsome home, swilling drinks and trading thinly-veiled put-downs. The hosts this time out are a guy named Sam and his wife Jo, who is terminally ill.  Although everyone—they, the couple’s next-door neighbors, their swinging bachelor pal and his new, not-quite-ditsy-as-she-seems girlfriend—is trying to ignore that fact.
It is only at the end of the first act, when those guests have gone, that some mysterious latecomers arrive, ready to deal with the mortal pain that both Jo and Sam are suffering.
Albee isn’t one for explaining his plays but my usual theatergoing buddy Bill stayed for a talkback the night he saw the show (I’d attended the same performance with another friend and, hungry, we sneaked out for dinner when the play ended). Bill told me later that Albee shared one version of The Lady from Dubuque’s origins.
It seems that he was playing bridge one night with his good friend Tallulah Bankhead and she suggested that it would be fun if he wrote a play in which she didn’t appear until the end of the first act because the anticipation for her arrival would make for a terrific entrance.  He eventually wrote it but she died in 1968, long before she could perform it.
Irene Worth, another good friend of Albee's, played the part when The Lady from Dubuque opened in 1980. But the critics didn’t take to the play and it not only closed after just 12 performances but ushered in the dark decade of Albee’s career, a time in which, he recently admitted to the New York Times, he battled alcoholism and drug dependency (click here to read the piece) and turned out plays that disappointed critics, his fans and perhaps even himself.
That time in the wilderness continued until Signature devoted a season to Albee’s works in 1993 and finally ended when he won the Pulitzer Prize for Three Tall Women in 1994 and  returned to Broadway with the triumphant revival of A Delicate Balance in 1996.
The Signature continues to do right about Albee with this production, which is directed by David Esbjornson, who also helmed the original production of The Goat, or Who is Sylvia?  Esbjornson clearly gets Albee and he has put together a cast that is equally simpatico.
It’s hard—and unfair—to pick out favorites. Michael Hayden and Laila Robins are poignant as Sam and Jo and it’s always lovely to see Jane Alexander, who is both majestic and maternal as the title character (click here to read an interview with her). I also got a particular kick out of seeing Peter Francis James, who is having such a great time in the role of the Lady's droll black sidekick.
But in the end, it’s the play that’s the thing here. Anyone who has experienced the dying of a loved one or is struggling with their own mortality will identify with it.
It took me days to sort out my thoughts and feelings about The Lady From Dubuque but I think I can now sum it up in a word: gratitude.

Labels: The Lady from Dubuque