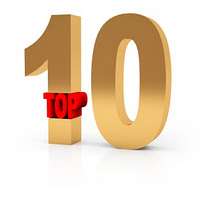 If you read as many “10 Bests” lists as I do around this time each year, it quickly becomes obvious that the lists say a whole lot more about the people making them than they do about any empirical merits (whatever those are with one woman's meat being another woman's poison) of the subject being graded.  And, of course, it’s no different with me and my list.

Regular readers will know that I’m a pushover for shows that take on big subjects like politics, class, race and religion, that I love bravura acting and sensational stagecraft and that I’m always happy to see shows reaching out to new audiences.  So, while I'm not claiming that these were the best shows to hit the boards in 2011, it probably won’t be surprising to see that the 10 shows I most admired this year are, in alphabetical order:
BLOOD & GIFTS: Unlike so many contemporary American playwrights, J.T. Rogers refuses to navel gaze and instead writes plays that wrestle with big issues. It’s hard to find one bigger than the U.S.’s involvement in Afghanistan. But Rogers doesn’t settle for dry polemics. On the contrary, aided by Bart Sher’s superb staging, Blood & Gifts is a totally involving—and thoroughly entertaining—evening of theater.
THE BOOK OF MORMON: I had some problems with this musical by the creators of South Park but even I appreciate the fact that it’s an original musical that isn’t based on a movie or TV show. And that despite, its potty mouth-humor and non-p.c. sensibility, it’s a well-made show that deserved its Tony for Best Musical and is also making look Broadway cool to young and hetero-male audiences.
DIARY OF A MADMAN: Geoffrey Rush used all of his considerable gifts—his majestic voice, knack for physical comedy and ability to excavate pathos from even the simplest sentence—to create the hapless and eventually mad government clerk in this virtually one-man adaptation of a short story by Nikolai Gogol that had a short run at BAM early in the year . It was a textbook example of bravura acting.
GOOD PEOPLE: Maybe it’s the economy but serious plays about the class divide have begun popping up recently and David Lindsay-Abaire’s drama about the uneasy reunion between two people who grew up together in a working-class neighborhood but went on to very different lives is the best so far. And the Manhattan Theatre Club gave it a beautiful—and beautifully acted—production that should have run longer.
JERUSALEM: People will be talking for years about the performance Mark Rylance gave as the mythic Rooster Byron in Jez Butterworth’s marvelous lament about the decline of Britain and of the independent characters who made it what it once was. But the rest of the cast and the production as a whole were just as extraordinary.
THE MOTHERF**KER WITH THE HAT: Stephen Adly Guirgis’s off-beat romantic comedy about a recovering drug addict and his less-than-faithful girlfriend was, hands-down, the most entertaining play of the entire season: simultaneously funny and touching and the kind of show that can be appreciated by both hardcore theater lovers and those who might previously have thought theater wasn’t for them .
QUEEN OF THE MIST: Yes, I do know Michael John LaChiusa but that’s not why I’m putting his latest musical on my list.  It’s because the songs from this show about the first person to survive going over Niagara Falls in a barrel still haunt me and because the show gave perennial sidekick Mary Testa the opportunity to shine in a leading role—and she glows.
THE NORMAL HEART: The revival of a play about the AIDS crisis could have been totally outdated but this production, directed by George Wolfe and anchored by a powerhouse performance by Joe Mantello, made history contemporary, the political personal and created one of the most affecting evenings of the entire season
OTHER DESERT CITIES:  Dysfunctional family plays are the bread and butter of the theater but Jon Robin Baitz added a new spin that goes right to the core of the right-left divide that has defined the Baby Boom generation, while refusing to take sides.  The play moved to Broadway this fall and is still good but the cast that debuted when it played off-Broadway was agonizingly sublime.
WAR HORSE: You can’t beat this play about a boy and his horse caught up in the horrors of World War I for sheer theatricality. The horses are all incredible life-size puppets but their performances are surprisingly moving.  The Steven Spielberg movie version that just opened is quite good but it lacks the wonder of what happens each night on the stage at Lincoln Center's Vivian Beaumont Theatre.  It’s what the magic of theater is all about.

And so now on to the new year, in which I wish you peace, prosperity, the love and company of good friends and, of course, oodles of good theater.

Happy new year, and thank you for everything you do in helping me keep in touch with theater. Well, almost everything. Maybe you could change the color of the URL links? Blue against the blue background is like camouflage!

Of these shows, I only saw Jerusalem (one of the disadvantages to living over 12 hours away from NY). But I can say that I was blown away by the magic that happened on that stage. That show was amazing and I'll be talking about the show AND the performance of Mark Rylance for a long, long time.

Hey guys, many thanks for taking the time to comment.

Jon, I agree with you totally about the link color but, alas, I've tried to change it several times (even brought in a tech guru) and it remains the same. Would welcome any ideas you--or anyone else--has about what I might do aside from changing the background color, which, I confess, I'm really reluctant to do.

In the meantime, Happy New Year to you and to Cara too. Cheers, jan

How did Follies not make the cut?

Sorry, RobertP. I liked Follies a lot but there isn't one show on this list that I'd moved to make room for it. Would love to know what else is on your list.