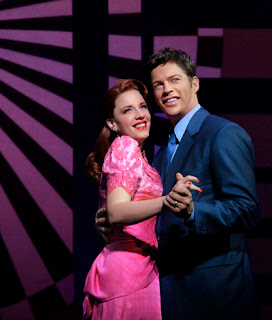 The shrinks who psychoanalyzed Broadway’s best back in the early ‘60s must have been doozies.  How else to explain the fact that two of the most high-profile flops from that period are about psychiatrists who come up with inappropriately wacky ways to screw with their patients?
I’m speaking, of course, about Anyone Can Whistle (book by Arthur Laurents; music and lyrics by Stephen Sondheim) and On A Clear Day You Can See Forever (music by Burton Lane and book and lyrics by Alan Jay Lerner). I don’t know what it says about the sanity of our times but after 40-year absences both have recently been brought back—Whistle in a spiffed-up Encores! production last year (click here to read my review) and On a Clear Day in a totally remade and less successful incarnation that opened at the St. James Theatre this week.
The main chatter this season has been about the changes made to the new production of Porgy and Bess, which begins previews tonight in advance of a Jan. 12 opening (click here to refresh your memory of the flap over that). And so the extensive reworking of On A Clear Day hasn’t received as much attention, despite major changes that if the equivalent were done to Porgy and Bess would populate Catfish Row with Swedes.
On Clear Day originally told the then-contemporary story of Daisy, a woman with self-esteem issues, a major smoking habit and a remarkable susceptibility to hypnosis. During sessions with her psychiatrist Mark Bruckner, it’s revealed that she had a previous life as a glamorous 18th century woman named Melinda. Complications ensue as Bruckner gradually falls in love with the alter-ego.
If only things were that simple in the new version that book writer Peter Parnell has cobbled together with considerable input from director Michael Mayer. Daisy is now Davey, a gay guy in the psychedelic ‘70s.
Davey’s remarkable susceptibility to hypnosis is discovered when he visits a gal pal’s psychiatry class. The intrigued doctor asks to see him again and is then beguiled by the alter-ego who emerges during their sessions.
The inner-woman is still a woman but this time she’s a ‘40s-era big-band singer. Complications still ensue, albeit not necessarily for the better. It might have helped if Mayer and Parnell had gone all the way with the gay angle and allowed the doctor to wrestle with his feelings about falling in love with someone who is actually a man.
There are a couple of moments when they flirt with that idea but they drop it fast as though worried that it might prevent the show from being considered family friendly.
Instead, the big draw is supposed to be Connick.  He was terrific in the 2006 revival of Pajama Game, so vibrant and sexy in the role that I thought he might be having an affair with his co-star Kelli O’Hara and then chided myself for underestimating his performing chops.

Now, I’m back to my affair fantasy because without O’Hara, or someone like her, to play off, Connick is Al Gore-stiff in this role or, as he admitted to he New York Times, totally out of his comfort zone (click here to read the whole piece).
The legendarily gifted Barbara Harris starred as both Daisy and Melinda in the original 1965 production of A Clear Day, with John Cullum as the besotted doctor. This time out, the part is split and Davey is played by David Turner, a journeyman actor who, according to the Playbill, has had several smaller roles on Broadway, while Melinda is played by Broadway newcomer Jessie Mueller.
Turner is appropriately quirky as Davey but he doesn’t have the pipes for the glorious Lane and Lerner songs. Luckily, Mueller does. She is, in fact, a knockout singer in the Garland/Streisand tradition and she almost stops the show with a bluesy number in the second act.
Her performance had me fantasizing again, this time about how Mueller might do as Funny Girl’s Fanny Brice. Although if they couldn’t raise money for the production that was to have starred TV’s Lauren Ambrose, it’s unlikely that they can raise money for one starring Mueller.
Speaking of money, this show seems to have been done without much of it. The skimpy sets by Christine Jones hit too hard on the psychedelic and often looks like a leftover from the old TV show "Laugh-In." Kevin Adams tries to compensate by working the lighting hard but the effect comes across as overly explicit.
Similarly, the usually great Catherine Zuber does what she can with the costumes but it’s hard to be subtle with ‘70s stuff.  Ditto the ‘70s-style choreography by Joann M. Hunter.
Fortunately, there’s no stinting when it comes to the music. An 18-piece orchestra under the baton of conductor and arranger Lawrence Yurman does the score proud.  And what a luscious score it is.
This version of the show has interpolated some songs from Lane and Lerner's 1951 movie “The Royal Wedding” and the 1970 movie version of On A Clear Day with Barbra Streisand as Daisy/Melinda.  A few numbers from the original stage production have also been cut. But the big hits—“What Did I Have That I Don't Have?” “Come Back to Me,” and of course the title song—are still there and still thrilling to hear.
In fact, if you ignore the inane plot, close your eyes and just listen to the music, you can have a swell time at On a Clear Day You Can See Forever.  Although you can do the same thing by throwing on a CD at home—and for a fraction of the price.

Labels: On a Clear Day You Can See Forever