Singing Hallelujah for "Sons of the Prophet" 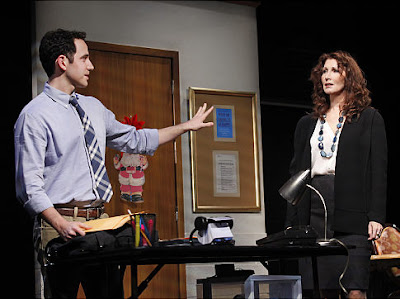 The New York Times critic Charles Isherwood has declared that Stephen Karam’s new play Sons of the Prophet is “the first important new play of the fall season.” That’s quite a compliment since it comes from a man who’s been so cranky of late that he recently announced he would no longer review Adam Rapp’s plays because he so dislikes them.
It’s a debatable stand for a critic to take and it’s been hotly debated (click here and here and here to read the back and forth). I’m still figuring out how I feel about that one but I'm in complete agreement with Isherwood on the Karam play, which opened this week at the Roundabout Theatre Company’s Laura Pels Theatre.
Karam made a splash three years ago with Speech & Debate, a sly comedy about high school misfits dealing with sexual identify, online privacy and free speech that was the inaugural production of Roundabout Underground, which showcases the works of young playwrights and tries to draw young audiences (click here to read my review).
Sons of the Prophet, a more ambitious work in every way, fulfills that earlier promise (click here to read a profile of the playwright). It's a terrific play and it's drawing young people too. The three people sitting next to me were 20somethings from France and a few seats away from them was a young retro-punker in a Mohawk.


The new play centers around Joseph Douaihy, a 29 year-old with a litany of problems that would make Job quake. Joseph’s widowed father has just died following a freakish car accident that is dividing their blue-collar town. His teenage brother is simultaneously obsessed with sex and St. Rafka, a martyr of the Lebanese Maronite Catholic Church the family attends. Their elderly uncle is inching inexorably towards the nursing home he dreads.
Joseph himself, recently an Olympic hopeful, has developed strange symptoms that have not only derailed his running career but forced him to take a job as assistant to a wacky rich woman so that he can get health insurance.  And adding heartache to Joseph's existential injuries, the man he loves may be using him to get ahead in his own career.

The play's titular prophet is an allusion to the famous book by the Lebanese-American poet Khalil Gibran, to whom the Douaihy family is supposedly related.  And it’s easy to see the play as a  Gibran-like parable on suffering, as Isherwood does (click here to read his review) and as I did in a piece I did for TDF Stages on Santino Fontana who plays Joseph (click here to read it).
But the more I think about it, the more I’m convinced that Sons of the Prophet is a marvelous meditation on the responsibilities we bear for the people we love, for those we don’t and for society as a whole. That’s weighty stuff for a play, even one that runs 1 hour and 45 intermissionless minutes.  But, although Sons of the Prophet wobbles in spots, it bears the burden with true grace. That’s due in large part to Fontana’s graceful performance.

Fontana has done fine work before as Algernon in the recent revival of The Importance of Being Earnest and as the older brothers in Billy Elliott and the aborted revival of Brighton Beach Memoirs. But he pushes into the top rank of young actors here. He is, by the way, also lovely in an interview and I was delighted to read yesterday that he's teaming up with the equally talented Bobby Steggert for a reading of the musical Yanks.
But Fontana doesn't do it alone. Peter DuBois’s direction is also deft. And there's impressive work from a nimble seven-member supporting cast that includes the stage vet Joanna Gleason as the wacky boss and newcomer Chris Perfetti, making a sensational New York debut as the wisecracking younger brother. And Lizbeth Mackay threatens to walk away with the whole play in the moving final scene.
It’s been awhile since I’ve had such an all-around good evening in the theater.  The guy in the Mohawk seemed to like it too.

Labels: Sons of the Prophet