"The Lyons" Can't Roar Cause It's Toothless 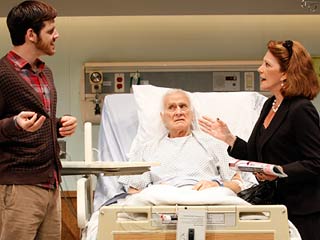 People see plays for all kinds of reasons.  I was excited about The Lyons because I wanted to see what made Linda Lavin turn down chances to reprise her terrific performances in two high-profile Broadway shows— as the "Broadway Baby" singing Hattie in Follies and the deliciously wry Aunt Silda in Other Desert Cities—in favor of doing this off-beat, off-Broadway play, which opened at the Vineyard Theatre last night. Now, having seen it, that question is still a mystery to me.
Playwright Nicky Silver has concocted a shaggy dog tale about a dysfunctional family (is there any other kind in the theater) that is trying to deal with the fast-approaching death of its ill and hospitalized patriarch. They’re not handling it well.
The dad is pissed off that he's dying. The mom fantasizes about remodeling the family apartment and taking a new lover when he's gone.  The grown-up daughter, a recovering alcoholic, feels oppressed by family obligations and her gay brother has relationship issues of his own, which hijack the second act of the play. Against the backdrop of all this we've-seen-it-before angst, everyone trades the kind of quips that have become the lingua franca of sitcoms.
As is so often the case, the actors work hard to salvage the show.  They’re lead by Lavin, who summons up her considerable comedic skills to punch up the jokes and deepen the clichés (click here to read a Q&A in which she talks about why she decided to do the show).
Dick Latessa puts his trademark crotchetiness to valiant use as the dad and Kate Jennings Grant and Michael Esper do what they can with the siblings. But Brenda Pressley is underused as a nurse and Gregory Woddell is burdened with a character who seems to have wandered in from another play that Silver may have been working on.
The playwright was standing outside the theater and chatting with friends after the performance my theatergoing buddy Bill and I attended. And he seemed quite cheery and content about what we’d just seen onstage.  I was tempted to go over to him and ask for an explanation but good manners held me back.
And it’s not just me.  The early buzz in the chat rooms wasn’t good and now that reviews are coming in, even fans of Silver's earlier plays are struggling to be supportive of this one (click here to read the NYTimes' lukewarm hurrah).

Ironically, the Vineyard is one of the off-Broadway theaters that recently announced they were going to start charging premium prices for some seats. It’s a disheartening trend, made even worse when it’s being applied to a less-than premium play.