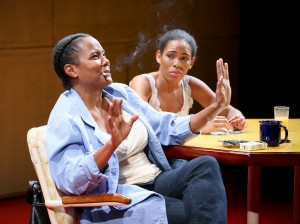 There’s an audience for Milk Like Sugar, the new play by Kirsten Greenidge that’s currently playing at Playwrights Horizons. But it's clearly not for everyone. About half way through this 100-minute drama about the precarious lives of black inner-city girls, the man sitting in front of me yawned so loudly that there couldn’t have been a person in the house—including the actors—who didn’t hear him.

It was an unforgivably rude thing to do. His companion poked him in the ribs and the malcontent behaved for the rest of the performance. But he wasn’t the only one in the largely white and largely late-middle-aged audience who seemed antsy about what he was seeing onstage.  And that's a shame because while the play has its flaws it's worth seeing.

In these last few years since the Obamas move into the White House, a number of plays about African-Americans have popped up in major off-Broadway productions and even on the Great White Way, including The Mountaintop, which opened there two weeks ago, Stick Fly, which is scheduled to land in December and the Pulitzer-Prize-winning Clybourne Park, which is rumored to be coming to Broadway in the spring.
But nearly all of those plays have dealt with middle-class or even affluent blacks, be it Martin Luther King, Jr. in The Mountaintop or the wealthy clan that summers on Martha’s Vineyard in Stick Fly.

Milk Like Sugar deals with a different demographic, one closer to the characters in the 2009 movie “Precious.” Which is surprising.  For despite that movie’s relative success (it grossed around $50 million) stories about truly poor people of any color have largely disappeared from view in the popular culture.

So Playwrights Horizons, which has co-produced the show with Women's Project, deserves Brownie points for staging a play like Milk Like Sugar and for giving a young playwright like Greenidge a chance. Greenidge has written the play in a mix of poetic language and ghetto lingo that doesn’t always blend. And her characters aren’t as fully developed as they might be.  And yet, Milk Like Sugar is affecting.

Its main character is Annie, a newly-minted 16 year-old who is pretty and smart but struggling to believe that the world holds more for her than the sad lives she sees around her. The play’s title is an allusion to the powdered milk that poor people often drink because it’s cheaper than the fresh stuff.

Annie’s two best friends want her to join them in a pack to get pregnant because they think having babies will be fun, like having live dress-up dolls. Her mother, once herself a teen mom, has a dead-end job as an office cleaner and a fondness for Scotch. A classmate Annie befriends clings desperately but futilely to religion. Only Malik, the boy who is supposed to father her child, can envision a way out.

Director Rebecca Taichman, who sat just a few seats away from my stepdaughter Anika and me at the preview performance we attended, has directed with brio, although she’s far too fond of the symbolism in her stylized scene changes.

But Taichman has assembled a crackerjack cast of mainly twentysomething actors. Angela Lewis is sweet and convincing as Annie and Cherise Boothe and Nikiya Mathis are thoroughly enjoyable as the best friends, who provide most of the considerable humor that leavens the heavier parts of the play.

The veteran and Tony Award-winning actress Tonya Pinkins plays has taken over the role of the mother from Eisa Davis, who originated the part in an earlier production at the La Jolla Playhouse, and she has a ball with the role.

It all adds up to a show that resembles one of those Afterschool Specials that ABC used to air in the ‘70s and ‘80s.  I don’t mean that as a put-down. A lot of those shows dealt with important issues in a simple but sincere and affecting way.
I suspect some of those old TV shows even changed lives. This play might do the same if only there were a way to get it to its target audience of young people grappling with many of these problems.  I bet there wouldn’t be a yawner in the bunch.