A "Follies" That Actually Earns Its Applause 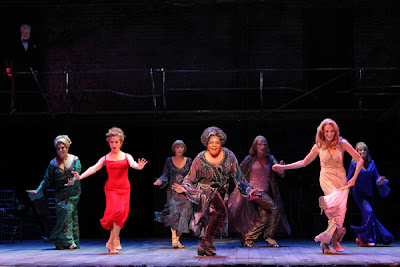 Sweeney Todd may be Stephen Sondheim’s masterpiece but Follies is his most beloved show. There have been at least a dozen major productions since this highly conceptual musical first debuted in 1971 and theater lovers have debated and analyzed each one with a fervent attention to detail that would put rabbis studying the Torah to shame.
They’ve been just as psyched about the latest revival that opened at the Marquis Theatre last week (click here to read theater maven Peter Filichia’s list of 40 things he likes about it). The show scored an A- on StageGrade and its limited run has already been extended to Jan. 22.
The ongoing fascination stems partly from the fact that the original production was not only written by Sondheim but co-directed by Hal Prince and Michael Bennett, who also did the choreography. Boris Aronson's now legendary set and the stunning costumes created by Florence Klotz helped raised the cost of the production to a then-astronomical $700,000.
Ted Chapin, president of The Rodgers & Hammerstein Organization, had the good fortune to be a production assistant, and has written a terrific book about the making of the show called “Everything Was Possible.”
I, alas, didn’t see that production, but others who did, like my theatergoing buddy Bill and my pals at Broadway Radio, can’t stop talking about it (click here to listen to one discussion about it).
The new production won me over the moment Bill and I walked into the Marquis and saw how set designer Derek McLane had covered the entire auditorium in drop-cloth material and carefully distressed the area around the proscenium. It’s a simple effect but it made the Marquis, usually a cold theater, seem like an old show palace and I felt instantly transported to the world of the Ziegfeld Follies to which the show pays homage.
For the tale that Sondheim and book writer James Goldman concocted famously revolves around the reunion of Ziegfeld-era chorus girls who have come together one last time before the dilapidated theater where they used to perform is torn down to make way for a parking lot. The former showgirls and their significant others reminisce, perform old routines, rue past decisions and think about other roads they might have taken, all while the ghosts of their younger selves roam the stage.
Two of the ex-showgirls—Phyllis and Sally—were once roommates but both are now in unhappy marriages. Phyllis feels emotionally estranged from her affluent husband Ben. Sally is depressed by the affair that her husband Buddy, a traveling salesman, is having and by her own long-simmering love for Ben. The heartaches the four experience have inspired some of Sondheim’s most memorable and most beautiful songs: “The Road You Didn’t Take” “In Buddy’s Eyes,” “Too Many Mornings,” “Could I Leave You” and “Losing My Mind.”
But Follies is also a tribute to the Tin Pan Alley writers and composers whose musicals dominated the first half of the 20th century. In his book “Finishing the Hat,” Sondheim talks about the delight he took in imitating the old styles and he recreates numbers from that era for the returning showgirls to perform. Meanwhile the problematic second act of Follies includes big but surreal production numbers in which the main characters act out their innermost thoughts.
That’s always been a lot to stuff into a musical and how well each production does it is the main topic of scrutiny.  Director Eric Schaeffer, who first put this production together at the Kennedy Center last summer, emphasizes the love stories and he has done a good job of clarifying those narrative lines, even if the reunion numbers get shortchanged and Warren Carlyle’s generic choreography is unable to produce any true showstoppers. Gregg Barnes’ costumes are on the dowdy side too, except for the drop-dead gorgeous gown he designed for Jan Maxwell’s Phyllis.
There weren’t big stars in the original production but ever since then, musical stars have angled to play the main roles and fans have debated the subsequent casting choices with the intensity of people making out scorecards at the start of fantasy baseball season. I’m still putting my money on the 2007 Encores! production in which Donna Murphy was magnificent as a bitterly disillusioned Phyllis and Victoria Clark  equally so as the achingly wounded Sally.  But the current cast has some MVPs too.
Bernadette Peters gets top billing but she seems to be trying too hard and her voice sounds tired; some of her recorded renditions of “I’m Losing My Mind” are far more devastating than the one she delivered at the performance Bill and I attended.  But Maxwell has won raves for her portrayal of Phyllis (click here to read a Playbill interview with her). Ron Raines is in fine voice as Ben.  And while it’s far too early in the season for this kind of prediction, Danny Burstein should win a Tony for his bruising performance as Buddy (click here to read a Q&A with him).
In the smaller roles, Jayne Houdyshell and Terri White are delightful as the one-time showgirls who perform the upbeat numbers “Broadway Baby” and “Who’s That Womn.” But best of all is the British musical diva Elaine Paige who plays Carlotta, the most jaded of the former chorines who gets to sing Sondheim’s anthem of showbiz survival, “I’m Still Here.” The song has become a standard in the repertoire of older female singers. They usually stress its optimism and perseverance but Paige makes it clear that she’s angry as hell at all she’s had to go through. It’s thrilling to hear such a familiar song sung in such a fresh way.
In fact, this entire production, as imperfect as it is, has made me see the entire show in a new way. I’ve always admired Follies but this time it touched my heart.  I suspect that’s because I’ve reached an age where when I look in the mirror, I now see the ghost of my younger self peering back and asking questions of me.

"There weren’t big stars in the original production"

Yes, there were. All of them had at one time been major Broadway and Hollywood stars.

Hmmm. I think that depends on how you define "major Broadway and Hollywood stars." Because—and no offense meant to Alexis Smith, Dorothy Collins, Gene Nelson and certainly none to John McMartin, who's still doing his thing wonderfully in the current revival of Anything Goes—none of these folks were top-of-the-bill names.

Smith had a so-so career in the movies and Collins' biggest credit was TV's Your Hit Parade; according to IBDB, both made their Broadway debuts in Follies.

The biggest name in the cast was probably Yvonne De Carlo and despite 30 years in Hollywood, her biggest credit was TV's The Munsters. Follies was her first Broadway show too.

But, by all reports—and some awards—they were all terrific in Follies. And I think we'll agree that's what counts.