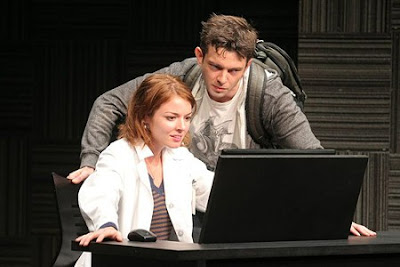 Everyone has their biases.  Mine is against what I’ve taken to calling yuppie tragedy: plays in which really great looking, really smart and usually really well-off people with really good jobs sit around, whine and trade quips about how hard life is.
And so I was pleasantly surprised by how much I liked Completeness, Itamar Moses’ new romantic comedy about two comely grad students—he’s in computer science, she molecular biology—who meet cute, recognize instantly that they’re made for each other and then spend the next two hours bantering and trying to figure out how to make their relationship work.
What sets Completeness apart from similar plays is how smartly it’s written.  Moses, a Yale grad and the son of academics, is clearly at home in the world of big thoughts (click here to read a profile that his alumni magazine did on him) and he’s not afraid to show off what he knows.
Some critics have compared the 34-year-old playwright to Tom Stoppard, who, as it turns out, was an early champion of Moses’ work. And indeed, the dialog in Completeness, which is currently running at Playwrights Horizons, bristles with Stoppard-like erudition. I had to listen extra hard to keep up with dialog about such concepts as the Traveling Salesman problem, a mathematical brainteaser about figuring out the most efficient route for hitting all the cities on a circuit.
But the science is really just a metaphor for the relationship and Moses aims Completeness at both the head and the heart. The science-speak is leavened with humor and down-to-earth insights into the ways in which smart people can act dumb. It’s a great first-date play. The guy in the couple seated behind me and my friend Jesse didn’t seem all that happy to be there at first but, if his laughter is any gauge, he ended up having a great time.
The production also benefits from Pam MacKinnon’s nimble direction and a crackerjack cast. Karl Miller and Aubrey Dollar are captivating and totally believable as the brainy couple. They toss of the scientific jargon with such ease that you’d think they’d spent hours in labs. And Miller and Dollar are equally unaffected in what is becoming a requisite nude scene.
They get sturdy support from Meredith Forlenza and Brian Avers, who do as much as they can to make the couple’s multiple ex and would-be lovers distinctive. But I do wish someone would set up an endowment fund so that theaters wouldn’t have to make actors double and triple up on roles.
The design crew also deserves a shout-out: so kudos to David Zinn's sly set and costumes, Russell H. Champa’s agile lighting and Bray Poor’s playful sound design.
Completeness is longer than it needs to be and there’s a postmodern coup de theatre in the second act that is too clever for its own good.  But that’s hardly a tragedy, yuppie or otherwise.

Hey Sarah, thanks for the comment. I'm a longtime reader of your blog and so it's particularly nice to have Broadway Baby in the house. Cheers, jan