Why "Sweet and Sad" Left Me Feeling Sour 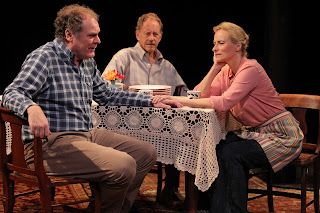 They say that all politics is local.  But that doesn’t mean it has to be banal.  And, alas, the latter turns out to be the case with Sweet and Sad, the new play by Richard Nelson that opened at The Public Theater this week.
As regular readers know, I’m always up for a play that takes on major contemporary events.  And it’s hard to get more major or more contemporary than the effects of the 9/11 attacks.  Sweet and Sad is set on the 10th anniversary of that fateful day.
The Apple family—three school-teacher sisters, their corporate attorney brother, an uncle, once a well-known actor now suffering from Alzheimer’s, and the live-in boyfriend of the younger sister who is a struggling actor—has gathered in Rhinebeck, the town about 95 miles up the Hudson River from New York City, where the eldest sister fled after the attacks.
This pointedly Chekovian clan has come together to share a meal before heading off to a 9/11 memorial service at the local high school. As they eat, they bicker, reminisce and exchange observations about politics and life. Tensions surface. Feelings are hurt.  Truces negotiated. Anyone who’s ever attended a family dinner will recognize the dynamics.
And verisimilitude is clearly a big deal for Nelson. He and the folks at the Public set the opening for the show on Sept. 11. The play unfolds over two intermissionless hours, just as a  family get-together would.  The food is real and the actors really chow down.
There can be drama and even poetry in the quotidian but there’s very little of either in Sweet and Sad. Instead, Nelson indulges in lame clichés about politicians not keeping promises. The Apples were also the subject of his previous play That Hopey Changey Thing, which is set on the night of the 2010 midterm elections, and now there are yet more plays on words about President’s Obama’s unfulfilled pledges of hope and change.
There are no fresh insights into the meaning of 9/11 either. One of the characters tries to draw a connection between the attacks on the World Trade Center towers and the story of Philippe Petit, the French hire-wire artist who walked a tightrope between the buildings on a bright summer day in 1974.  But that observation has already been made, and more brilliantly, in both the Academy-Award winning 2008 documentary “Man on Wire” and in Colum McCann’s 2009 National Book Award-winning novel, “Let the Great World Spin.”
During the last 20 minutes of the play, one of the sisters questions whether the government should have paid money to the families of the people who died in the attacks and whether it isn’t finally time to just move on. It’s supposed to be daring talk that lays bare unspoken truths.  But who hasn’t heard all this before?
Nelson has directed the play himself and he’s assembled an A-level cast of some of the city’s finest stage actors including Jay O. Sanders as the brother, Jon Devries as the uncle and Laila Robins as the highstrung middle sister. But Scott Lehrer and Will Pickens’ sound design undermines their efforts. My husband K and I were sitting in the fifth row of the middle section of the theater and still couldn’t make out large chunks of what was being said.
Early in the play, the actor boyfriend goes off on a tangent about the responsibility that audiences have when they see a play. I’m a believer in that too but I felt as though I were being unnecessarily chided and the reprimand pissed me off.  The first obligation in the theater is the playwright’s and it’s to write an interesting play. And for me, Sweet and Sad is a promise unfulfilled.

I'm sorry you didn't like "S&S" -- I really thought it was beautiful, especially having seen "The Hopey Changey Thing" last year.

Theaterwords, I'm sorry that it didn't work for me too. But I'm glad it did for you and that you took the time to leave a comment saying so. If you get another free moment, I'd love to hear more about why it worked for you.