"Spirit Control" Spins Too Far Out of Control 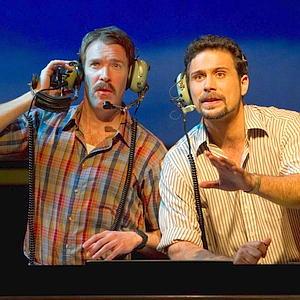 It usually takes no more than the first 15 minutes of a play for me to tell if I’m going to be in for something special or for one of those evenings when I’m sneaking peeks at my watch. Spirit Control, the new drama currently playing at the Manhattan Theatre Club through Dec. 5, proved to be an exception to that rule.
I was totally riveted during the play’s first 15 minutes as an air traffic controller tries to talk down a small plane flown by a terrified woman whose boyfriend has suffered a heart attack while he was flying.  I was totally bored by the rest of the play, as it tracks the lives of the incident’s survivors over the next 25 years.
I’d had higher hopes for this show. Playwright Beau Willimon has won a slew of awards, been playwright-in-residence at London’s famed Donmar Warehouse and previously wrote Farragut North, a much-praised political drama inspired by Howard Dean’s 2004 presidential campaign that is being made into a movie by George Clooney. But neither Willimon nor director Henry Wishcamper has figured out how to make us care about Spirit Control’s characters or about what happens to them after those first gut-wrenching moments.
In fact, they seem confused about what kind of play this is. It unfolds at times like an existential thriller; at others like a domestic melodrama—sometimes within the same scene. Two women sitting behind my buddy Bill and me apparently decided that it was a comedy.  They kept barking out laughs at inappropriate moments while the rest of the audience sat dazed and confused.  “What’s the point?,” I finally whispered to Bill.
The acting almost rescues it. Jeremy Sisto, who has made a name for himself on TV in HBO’s “Six Feet Under” and as one of the detectives on the recently departed “Law & Order,” has the stage chops to make the air controller a compelling character and Mia Barron brings an appropriately unsettling seductiveness to the role of a mysterious woman he meets. But Willimon gives them and the rest of the able cast too little to work with.
Sisto told the New York Post that he asked the playwright for help with his character (click here to read the article). Willimon says he complied with a letter explaining why he’d written the play. I wish he’d send a copy to me.

This is exactly what I've heard about Spirit Control from more than one other review. It kind of makes me want to see it even so. Sometimes I'm just as interested in watching how a play fails as how it succeeds...

I know what you mean, Leigh. It can be instructive to see a show that doesn't work. Please come back and let us all know what you thought of the show if you do go see it. In the meantime, many thanks for reading B&Me and for taking the time to leave this comment. Cheers, jan