"A Life in the Theatre" Suffers an Early Death 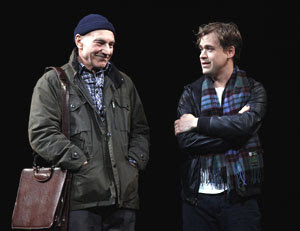 Who would have thought that a play starring “Star Trek”s Capt. Jean-Luc Picard and “Grey’s Anatomy”s  Dr. George O’ Malley would be playing to a half-full house on a Friday night?  But that was the case when my husband K and I saw Patrick Stewart and T.R. Knight in the current revival of A Life in the Theatre, which opened at the Gerald Schoenfeld Theatre on Oct. 12. And it's what made it less of a surprise when the word came yesterday that the play has shortened its limited run and will close at the end of this month, five week’s ahead of schedule.
A Life in the Theatre, which has been called playwright David Mamet’s love letter to the theater, charts the travails of two actors in a middling repertory company.  One is older and trying to hang on to a career that hasn’t turned out quite as he’d dreamed it would.  The other is an up-and-comer whose future is still full of possibilities. They’re played here—and winningly—by Stewart and Knight, who not only have their movie and TV followings but the stage chops to bring off the parts.
The high star wattage and the low overhead of just a two-man cast would seem to be a producer’s dream.  But there were early signs that the production might not have been destined for a long life: it took 20 producers to bring the 90-minute show to Broadway.  And maybe it shouldn’t have come.
A Life in the Theatre is a small show and Santo Loquasto’s nimble set, which places the actors onstage, in the wings, and at their dressing tables, is almost too grand, as though it has to justify ticket prices that go up as high as $121.50.

I remember being both amused and moved when I saw the original, and considerably more modest, production back in the late ‘70s. But this time, I was only slightly amused and found myself wondering what’s the point?  What’s the story here? Some of the blame for that has to go to director Neil Pepe.
Pepe, the artistic director of the Atlantic Theater Company, which Mamet co-founded, is an old hand at helming Mamet plays but this one is something of an anomaly in the Mamet canon and requires a different touch than the playwright’s usual macho slugfests.

Pepe hits the laughs in A Life in the Theatre hard as the characters withstand all kinds of mishaps—from scenery malfunctions to missed cues—during the play’s 26 quick-fire scenes and as many costume changes. Kudos are due to costume designer Laura Bauer and to the unsung dressers Moira Conrad and Julien Havard who get Stewart and Knight in and out of a series of hilarious outfits and wigs within seconds (click here to read Stewart’s account of the fast changes).
But Pepe’s direction falls short when it comes to showing how the relationship between the two men evolves over time and how, in essence, they represent the continuum in the life of most actors.  Without that,  A Life in the Theatre comes off as little more than an acting exercise.  Which, in light of the show’s premature closing, apparently isn’t enough.

Labels: A Life in the Theatre