"Elf" is a Sugarplum-Sweet Christmas Treat 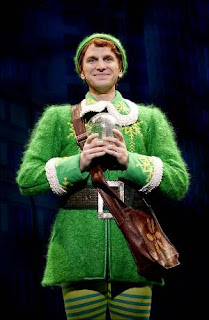 It probably won’t come as a surprise to you that a semi-professional grouch like me is not the target audience for Elf, the new musical version of the 2003 Will Ferrell movie about a man who believes he’s a Christmas elf.  But my sister Joanne sits right in the bullseye of that demographic. She has a huge soft spot for holiday shows. And she’s not alone.

Joanne and I ran into an old colleague of mine and her 14 year-old daughter Melissa at the performance we attended. Melissa was so excited about the show that she was snapping pictures of everything—the marquee outside the Al Hirschfeld Theatre, the curtain inside, the ushers—with her cell phone camera and instant mailing the photos to her envious friends.
In fact, cameras were popping all over the place and the anticipation in the air was as rich and thick as an eggnog. A quartet of Russian speakers sitting next to me chatted excitedly—Miss Daisy and Mamma Mia! were the only words I recognized—but they kept looking at their watches, obviously impatient for Elf to begin.
Two hours and 15 minutes later, Joanne, Melissa and the Russian ladies all left with big smiles on their faces. And I hadn’t had a bad time either. Sebastian Arcelus, who plays Buddy the Elf, is no Will Ferrell but he’s tall and hardworking and once his nerves settle down quite appealing in a relentlessly cheery way that’s totally appropriate for the title role.
The rest of the 26-member cast, which includes Broadway stalwarts like Beth Leavel, Amy Spanger and Michael McCormick, is out to please too. And director-choreographer Casey Nicholaw keeps them bouncing along with the kind of song-and-dance numbers that don’t break any new ground but are fun to watch.
The show is produced by Warner Bros., which made sack loads of money off the movie and clearly hopes that it can extend the brand with this stage version (click here to read an article about its strategy), and so the book sticks close to the film script.  But you can still make out the handprints of the writers Thomas Meehan (a triple Tony winner for Annie, The Producers and Hairspray) and Bob Martin (who took home his own statue for The Drowsy Chaperone).
The show starts right off with a sly homage to Drowsy Chaperone’s Man in Chair: the first thing you see in Elf is a joke-cracking Santa who’s seated in an armchair and talking directly to the audience.  The fact that he’s played by George Wendt (forever beloved as Norm from the old sitcom “Cheers”) only adds to the audience's delight.
This Elf goes all out to please kids of all ages. There are sight gags and topical jokes about Charlie Sheen and iPads, right in step with the pop cultural references that have made recent movie cartoons like "Shrek" such moneymakers.

David Rockwell’s sets intentionally echo Christmas pop-up books, Gregg Barnes’ costumes are seasonably jolly and the music by Matthew Sklar and Chad Beguelin, the duo behind the stage version of The Wedding Singer, is so Christmasy that people in the audience started to sing along as though they already knew the songs.
Now, it probably won’t surprise you that most of the critics, who get paid for being grouches, are crying “Humbug.”  Grinches to the bone, they find Elf “helplessly corny,” “sappy,” “too sweet” and “sentimental.”  They’re right. Elf is not hip.  Or ironic. It’s an unabashedly schmaltzy show. But hell, if you can't be corny, sentimental and sweet at Christmas, when can you be?