Why Broadway Went Short on "Enron" 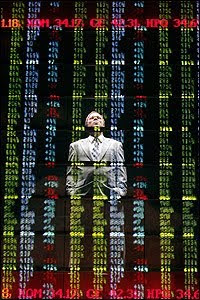 I don’t usually write about shows that have already closed but I’m making an exception in this case. Enron, the much anticipated British import about the financial skullduggery that brought down the big Houston-based energy company, closed on Sunday after just 16 performances at the Broadhurst Theatre and its premature departure has set off a grudge match between critics on opposite sides of the Atlantic about why the show energized theatergoers in London but flat lined in New York.

The first punch was thrown when Michael Billington, recently voted the most influential critic in London, posted a column on The Guardian website entitled “Enron's failure shows Broadway's flaws,” which lamented “the aesthetic conservatism of a theatre culture” in the U.S. (click here to read Billington’s column.)
Some New York critics like Talkin’ Broadway’s Matthew Murray took immediate offense and jumped to the defense of the American theatergoer, declaring that Billington should mind his own business (click here to listen to Murray on Broadway Radio’s “This Week on Broadway.”)

But others took a more measured approach. Jason Zinoman, writing on vanityfair.com, suggested that Enron may have failed on Broadway because the show’s 29 year-old playwright Lucy Prebble misunderstood and oversimplified the financial tanglings at the company (click here to read Zinoman’s argument.) While Bloomberg’s Jeremy Gerard hypothesized that Americans may be too familiar with the story or find the 2000 Enron scandal dated in the light of the current shenanigans at Goldman Sachs (click here to read Gerard’s argument.)

I don’t know why Enron flopped. I liked the show.   Or maybe admired is a better word.  I’m a sucker for imaginative stagecraft (my favorite show in 2009 was the Kneehigh Theatre’s production of Brief Encounters, a delightful mash-up of musical hall numbers, video imagery, puppetry and other spectacular coup d’theatre) and Enron’s director Rupert Goold used every trick in the book, and more.

Puppets and masks turned arcane accounting practices into amusing metaphors—the dummy corporations that Enron execs called raptors because they were supposed to eat up the parent company’s debt were represented onstage by actors wearing dinosaur masks.  The complicitous accounting firm Arthur Andersen was portrayed as a ventriloquist’s dummy. Flashy video projections simulated office settings and a giant stock ticker.
And although Enron is a play, there were several musical numbers, exuberantly choreographed by Scott Ambler. Adam Cork’s score earned one of the four Tony nominations the show received (although none in the major categories, which is probably what caused the show’s 35 producers to pull the plug on Sunday; but you can see a few scenes from the show by clicking here.)

I hope I don’t come off as some Broadway Benedict Arnold if I say that the Brits do seem more comfortable playing with this kind of stuff than we do here in the U.S.  Inventive shows like Andrew Lloyd Webber’s The Woman in White, a video-projection pioneer that replaced conventional sets with computer-animated scenery of rooms and hallways in a ghost-ridden mansion; and Coram Boy, which mixed narrative recitations, 19th century period dance and Handel choruses, were more successful over there than here.
The Woman in White ran for a year and a half on the West End but lasted just 109 performance on Broadway.  Coram Boy enjoyed two limited runs at London’s National Theatre but eked out just 30 performances at the Imperial Theatre where Billy Elliot is now playing.

Like Enron, The Woman in White and Coram Boy also fared poorly with the New York critics, who accuse them all of having more sizzle than steak.  Well, I welcome the innovative stylization but I disagree that these shows lack substance.
Coram Boy dealt with the plight of orphans in the 18th century and the horrors of the slave trade.  While Enron plunged right into one of the major issues of our day: how to bridle the greed of capitalism without crippling the entrepreneurial spirit.
Still, as noble as these intentions may be, what these shows haven’t figured out is how to involve the audience emotionally.  They are all head and almost no heart.

The Broadway cast of Enron, lead by Norbert Leo Butz as the company’s ruthless former president Jeffrey Skilling; Gregory Itzin as its good old boy CEO Ken Lay, Stephen Kunken, as the diabolically nerdy chief financial officer Andrew Fastow and Marin Mazzie, playing a fictionalized character based on the sole woman in the corporate hierarchy who got out before things fell apart, are all terrific.  But you don’t want to root for any of them. I wasn’t bored at Enron but I wasn’t moved by it either.

it's really a shame, very sorry to see ENRON go.

Well said but I hasten to add that it is hardly to the West End's credit that The Woman in White ran for a year and a half here. We're quite embarrassed about it actually.

Perhaps it's my college experience with British literature, especially children's lit, but I was enthralled by "Coram Boy" from start to finish. So much so that I went to see it again on its closing performance.

It felt rather Dickensian; lots of plot and sinister characters, et al. Superb cast and interesting use of stagecraft and music. I was really quite taken with the entire experience. I especially loved Jan Maxwell and Xanthe Elbrick's superb performances.

On the other hand, you couldn't have paid me to sit through "The Woman in White." That said, I am sorry that "Enron" closed before I had a chance to see it.

I'm with you. I hated to see it close so quickly, especially given how innovative it was in telling this story so theatrically. But it's still playing in London.

I really liked your take on this. I really agree with you—I appreciated the inventive storytelling. So many straight plays become TOO straight. Regardless of the writing, they can become dull in their delivery. ENRON dared to shake things up with unconventional tricks.

I just interviewed Stephen Kunken, and he talks about what he thinks were the play's biggest obstacles. Check it out if you're interested.