Time Out for Tony Talk 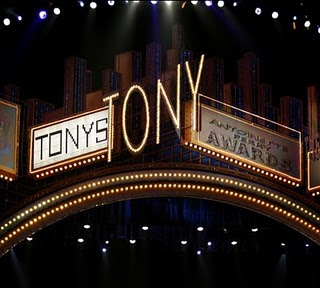 As usual, so much has been written in the less than 24 hours since the Tony nominations were announced that there isn’t much left to say (although if you’re still in the market for some smart commentary click here to read the recap by my fellow blogger The Playgoer).  So instead of chiming in my two cents about the slaps in the face to The Addams Family, Enron, Race and Daniel Craig, or the pats on the back for Fela!, In the Next Room, Next Fall and Jan Maxwell, I’m going to talk about just one thing: how very sad it is that there are so few musicals with original scores this season that the nominators had to include music from the straight plays Enron and Fences.

I’m not trying to diss the work done by Adam Cork for Enron or Branford Marsalis for Fences.  I haven’t even seen either of those shows yet.  But I am lamenting the fact that the Broadway musical is in such a dismal state that it can’t fill out the music part of its own category. You could blame the whole thing on the current obsession with branding.  At least that’s what I’m doing.
Branding has taken over the entire culture.  That’s why we get movie sequels and remakes, novels based on characters from other novels and, in the theater, jukebox musicals.  Producers know that it’s easier to sell shows with built-in name recognition so they build them around movies and TV shows like The Addams Family or repackage a musician’s past hits be they from the Green Day album American Idiot or the Stephen Sondheim songbook that fuels Sondheim on Sondheim.

And speaking of Sondheim, there’s no question that he’s a genius but so were Cole Porter, George and Ira Gershwin, Oscar Hammerstein and Richard Rodgers and the theater of their day found a way to nurture their very different talents.  As it did the varying musical styles of Sondheim and his contemporaries Jerry Herman and John Kander and Fred Ebb.
We need to find a way to do that for a new generation of musical talent today. That means not putting down Elton John or Phil Collins or Paul Simon (I still love his score for The Capeman) when they write shows that don’t sound like Sondheim’s (the schadenfreude when John lost last year’s award for Best Original Score was thicker than the jam on a Linzer torte).
Instead, we should all welcome the fact that these songwriters, who’ve already made their bones in the pop field, want to write for Broadway and we should encourage them to keep trying their hand at it.  We should champion new talents too.  Which means a few less revivals, a few more original musicals by folks like Next to Normal’s Tom Kitt, In the Heights’ Lin-Manuel Miranda and Passing Strange’s Stew.
All their shows may not be great ones. But Sondheim, Porter, Herman, Kander & Ebb and Rodgers and Hammerstein flopped at times too.  Maybe Broadway, where musicals now routinely cost eight figures to produce, can’t afford that kind of experimentation any more but isn’t that what nonprofits like Roundabout, Lincoln Center and the Public Theater should be doing?  Which is why, even though I wasn’t crazy about the show, I give the Public Theater props for mounting the emo musical Bloody Bloody Andrew Jackson.

I love a show tune as much as the next theater geek but I tell you, I’d be delighted if the Best Original Score ballot in 2020 were composed of Lady Antebellum, Radiohead, Jay-Z, Tom Kitt for his fourth or fifth Broadway show and some 25 year-old wunderkind who'd recently come out of the BMI Musical Theater Workshop.

Excellent commentary on the state of Musical Theatre.

Your point regarding how Broadway should welcome back pop song writers particularly struck a chord with me. It used to be that songs by stage tunesmiths abounded in our popular culture. With few exceptions Broadway cast recordings are relegated to its sidelines today.

Maybe, just maybe, if Broadway gave these folks a chance and they actually succeeded, their tunes could also once again break through into the public consciousness (via radio, television, etc.), thus helping generate more excitement about seeing the source material and selling more tickets to Great White Way shows.

Hey Steve, many thanks for the encouraging words. There is hope. I've read that Sting may be working on a new musical and that's a good thing. And, of course, Bono and The Edge of U2 have written the score for Spider-Man, although I wonder if we'll ever get to see that show. Like Paul Simon's Capeman before it, Spider-Man may be done-in by a misguided and unnecessarily complicated production.

I absolutely agree with you Steve, especially about my great friend Cole Porter!

By the way I would like to know your personal opinion between "Fela!" and "La cage aux folles".