Its Director Tarnishes "The Metal Children" 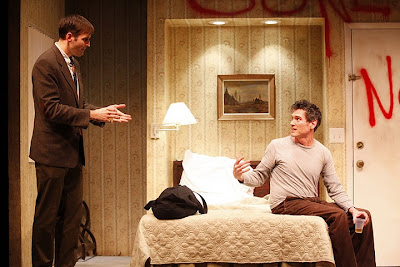 Adam Rapp is one of those up-and-coming playwrights whose work every theater lover should have seen at least once by now.  He’s written more than 15 plays over the past decade and a half, including Red Light Winter, which was a finalist for a Pulitzer in 2006. I, however, somehow managed to miss all of them. And, adding insult to injury, I’ve usually confused Rapp with his actor brother Anthony, the once-and-forever Mark in Rent. Eager to correct these shortcomings, I jumped at the chance to see The Metal Children, Rapp’s latest play which is currently running at the Vineyard Theatre.  Maybe I should have waited a little longer.

The play’s subject is certainly compelling: its protagonist is Tobin Falmouth, a New York writer whose young adult novel has been banned by the school board in a small, white-bread town called Midlothia.  Upping the stakes, Rapp makes the book a supernatural tale in which pregnant teens mysteriously disappear, leaving behind metal statues of themselves. It ends when the novel's main character defiantly aborts herself with her father's hunting knife.

As one might expect, religious conservatives in Midlothia are outraged by the book. The head of the town’s high school English department (nicely played by Connor Barrett) just as fervently believes that it's an appropriately artistic expression of the kind of issues young people face. Local teens have lined up on both sides; some are beating up the book’s supporters, others are showing their solidarity with it by actually getting pregnant themselves. Falmouth is invited to town to defend his work.

Plays that deal with big ideas and issues like the tension between artistic freedom and responsibility are usually right up my alley. And Rapp, who has written young adult novels and had one banned (click here to read a New York Times article about how an incident in his life inspired The Metal Children) would seem the ideal person to take on this one.

He does get points for writing a play that allows both sides to have their say—there’s an emotional speech by a conservative woman near the beginning of the second act. But he loses them for directing the play himself in such a cartoonish way—the speeches the townsfolk give may raise valid points but what they say is largely undermined by their portrayal as eccentric yokels—that I ended up not caring who was right or what happened to the characters and sneaking peeks at my watch to see when the whole thing would end. And I felt that way despite a brave performance by the always-fascinating Billy Crudup, who fought hard against the temptation to portray Falmouth as an avatar of lefty virtue.

Despite my reservations, however, both the play and this production have their supporters.  The critical response is split (click here to read the reviews on StageGrade.) But the night my friend Ellie and I saw the show, the audience was peppered with people I’d seen on other stages, including the talented actress Annie Parisse, terrific in both Becky Shaw and Clybourne Park.
There’s a small area outside the green room at the Vineyard where people waiting to see cast members after a show can stand.  About a quarter of the audience seemed to gather there that night, as though the word had gone out on the theater insiders' grapevine that The Metal Children shouldn’t be missed or that its actors would need support.