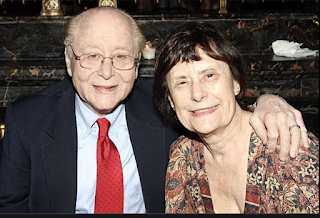 My friend Seymour "Red" Press died yesterday. Although to call him a friend doesn’t really describe what he meant to my husband K and me. Red was a longtime musical contractor and K, a trumpet player, met him when Red hired him to play in the orchestra for Sophisticated Ladies. But over the next 40 years, the relationship between them deepened into a kind of loving father-son bond such that whenever we made plans to see Red and his much beloved wife Nona, I told people that I was going to spend time with my in-laws.

We shared many dinners, sometimes in our homes but more often at a favorite French bistro or Italian restaurant where they knew us and let us linger. We talked about theater of course but also about books, places we'd traveled to or wanted to see, what was going on with our families and politics. Red had fought to strengthen the musicians' union in the 1960s and he was committed to diversity decades before that became trendy, going out of his way to hire black and brown musicians. I adored him.

But K and I weren’t the only ones who loved Red. Almost everybody in the business did. That was evident eight years ago when so many theater folks (actors, directors, composers, conductors, producers, house managers, dancers, musicians and more) crammed into the upstairs room at the Glass House Tavern to surprise him for his 90th birthday. If someone had wanted to they could have put on a full Tony-caliber production just with the people who had gathered in that room to celebrate him.

A woodwind player, Red started out playing the saxophone in big bands, including those lead by Tommy and Jimmy Dorsey and Benny Goodman. But in 1957, he got a job playing in the orchestra for the Broadway musical The Body Beautiful. It ran just 60 performances but he made it back to Broadway a year later playing for the original production of Gypsy. And by the 1970s, he began his career as a contractor, hiring the musicians to play in the pit.

He worked on over 90 Broadway productions. He also helped to create the New York City Center Encores! program, where he worked on another 75 productions. In 2007, he received a Tony Award for Excellence in the Theatre (click here to hear him talk about his career).

Red never stopped loving theater or working at it. Although he turned 98 last February, he has three new productions in the current 2022-2023 season: Into the Woods, Almost Famous and KPOP.

But shortly after Nona's death last year, Red decided to move into an assisted living facility to be near his daughter Gwynn and her family. She told K that yesterday morning Red told the workers there that he wanted to go to Broadway. So they put on show tunes and he passed while listening to the music he loved and dedicated his life to sharing with the rest of us.