A Nay for "Baldwin & Buckley at Cambridge" 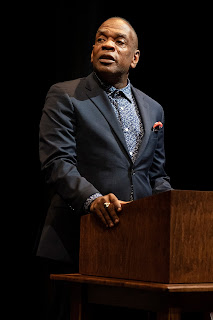 As a recent story in the online magazine TDF Stages noted, James Baldwin is having a theatrical moment (click here to read more about it). The black writer and intellectual, who died in 1987 at just 63, has appeared as a character in three quasi-documentary plays this year.

Last spring at the Vineyard Theatre, the theater collective The Commissary re-created the TV interview between the poet Nikki Giovanni and Baldwin in Lessons in Survival: 1971. The theater company the american vicarious is currently touring venues throughout New York City's five boroughs with Debate: Baldwin vs Buckley, a recreation of the 1965 encounter that took place when the Cambridge Union invited Baldwin and the conservative intellectual William F. Buckley Jr. to argue the question of whether the American Dream had been achieved at the expense of the American Negro.

Meanwhile, Elevator Repair Service is offering Baldwin & Buckley At Cambridge, its version of that Cambridge debate, at the Public Theater through next weekend. That’s the one I caught, tempted by ERS’s reputation for taking famous texts and dramatizing them word-for-word even though I haven’t been as taken with their previous shows as others have been.

I wish I could say this production had changed my mind about ERS. But although the Cambridge students voted 544 yeas to 164 nays in favor of Baldwin, I'm going to have to vote nay for this barely dramatized and minimally staged version of his debate. At least, unlike ERS's eight-and-a-half hour reading of “The Great Gatsby” (click here to read my review of that), this show lasted just a little more than an hour. Even so, I found that my mind wandered.

The show starts, as the real debate did, with two Cambridge students speaking on either side of the question. Both students were white and so it’s somewhat baffling why director John Collins cast the black actor Christopher-Rashee Stevenson to play the student arguing that the American Dream did not exclude African Americans during their first 350 years in this country when they were subjected to the horrors of slavery, the failures of Reconstruction and the oppression of Jim Crow segregation.

But the production's main problem is that it’s hard to replicate Baldwin’s singular charisma. Greig Sargeant, who conceived the project for ERS, is dark-skinned and small in stature just as Baldwin was but, alas, the similarities end there. It might not be necessary to emulate the distinctive and slightly posh way that Baldwin spoke but anyone playing him needs to be able to radiate both the brilliance and the anger that fueled his words.

Sargeant clearly cares deeply about this project (click here to hear him talk about it) but there’s a whiny quality about his performance that undercuts the passion of Baldwin's still relevant message.

Ben Jalosa Williams doesn't imitate Buckley’s upper-class drawl either. But nor does he capture the disdain that Buckley often exhibited when he believed he was dealing with intellectual inferiors and that he used in his Cambridge speech as he urged African Americans to just work harder if they wanted to do better. So the portrayal comes off as rather bland.

The audience is supposed to fill in for the Cambridge students but, polite theatergoers, we were also a poor substitute for the cheering and braying familiar to anyone who has watched episodes of the British Parliament’s raucous Question Time.

Baldwin & Buckley At Cambridge tries to save itself with a coda that imagines a scene between Baldwin and his good friend the playwright Lorraine Hansberry but it's too little and too late.

The one good thing I can say about Baldwin & Buckley At Cambridge is that it prompted me to watch the real 1965 debate on YouTube (click here to see it). The words, of course, were the same but this time the effect was riveting. It was so good, I watched the entire thing and my mind didn’t wander once.