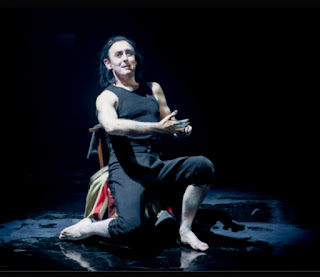 After working on it for nearly seven years, the duo took the piece to the Edinburgh International Festival in August (click here to read about their journey). When word came that they were also bringing it here to New York, my always-up-for-anything theatergoing buddy Bill and I bought tickets to see it.

However in the end, none of that really mattered. Burns, the author of the New Year’s Eve classic “Auld Lang Syne,” is a compelling subject. The son of a poor tenant farmer, he was largely home schooled and spent most of his early years laboring on the farm although he never developed a knack for it and would struggle with making a living until he died at the age of 37.

Burns began writing mainly as a way to woo girls and he remained lusty throughout his life, siring 12 children, three out of wedlock and the last born on the day of his funeral. But his poems, an innovative mix of Scottish and English wordplay, eventually branched out to deal with such subjects as class inequality, the role of the church in society, the poet's own intermittent bouts of depression and his always abiding love for his homeland.

There were bits of stage magic—a quill pen that writes by itself—and other memorable images: the women in Burns’ life were represented by shoes that dangled from the ceiling on ribbons. Terrific videos by Andrzej Goulding and effective lighting by Tim Lutkin recreated the Scottish landscape and the peaks and valleys inside Burns’ mind.

As Bill and I stood outside the theater after the show, he said how glad he was to have seen it. Me too.