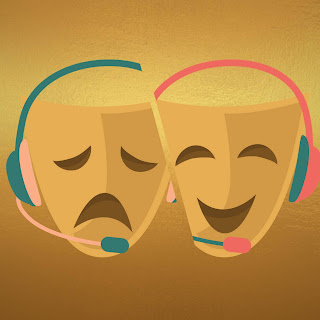 Monday is Labor Day, which means that it’s time for my annual tribute to some of the people whose labor makes the theater we all love work. I’ve been doing this for 15 years now and I can’t tell you how embarrassed I am that I’m just getting around to celebrating stage managers, who may be the hardest working people in the business.

Stage managers are the linchpins that connect the creative and technical sides of every production. They make sure that actors don’t forget their cues and that props are where they should be onstage. They run tech rehearsals so that the lighting and sound folks can work out their plans and replacement rehearsals so that newcomers to a production can figure out what they’re supposed to do. They provide a shoulder for everyone from the director to the dressers to cry on. And they gamely—and graciously—shoulder the blame when things go wrong, even when it isn’t their fault (click here to read some specific stories about what they do).

I got some further insight into what it takes to be a good stage manager by reading “Whenever You’re Ready: Nora Polley on Life as a Stratford Festival Stage Manager.” When Polley first started out in the early 1970s as an assistant stage manager at the Ontario-based festival, an old-timer told her “If anybody notices you are doing your job, it’s because you’ve just made a mistake…good stage management is invisible.”

Over the next four decades, Polley would take that to heart, quietly dealing with everything from doling out breath mints to actors about to engage in an onstage kiss to administering first aid when an actor collapsed in the middle of a scene. And, like her brother and sister stage managers at theaters large and small, doing it all without the glory that comes from being onstage, content to settle for the occasional compliment of “Good show.”

Polley had retired by the time Covid created the unprecedented crisis of closed theaters all over the world. But Richard Hester, a Broadway stage manager who has worked on such shows as Titanic, Sweet Smell of Success and Jersey Boys, swung into action and, in typical stage manager style, kept up the morale of his colleagues in the community with a series of blog posts about how he and they were making it through the pandemic. He’s collected those tales about that darkest time between March 2020 and April 2021 in his new book “Hold, Please: Stage Managing A Pandemic.”

Another thing to come out of the pandemic was the call for greater diversity and inclusion backstage as well as onstage. There have been stage managers of color in the past. My college schoolmate, the great Fémi Sarah Heggie, got her start with the Negro Ensemble Company and was one of the first African-American women to get an Equity card as a stage manager.

Over the years, Fémi has worked on such Broadway shows as Ain’t Supposed to Die A Natural Death, Jelly’s Last Jam and Once on This Island.  And there have been others, including Lisa Dawn Cave, who has some 20 Broadway credits over the past two decades, including the original production of Caroline, or Change and Shuffle Along.

But a study conducted by Actors' Equity Association (which represents stage managers as well as actors) revealed that between 2016 and 2019, fewer than 3% percent of the stage managers working on professional productions in the entire country were black (click here to read more about that). And when African Americans do get hired, they tend to get hired primarily for shows by black playwrights or those with largely black casts.

Lately, there have been some more hopeful signs of change.  Both the La Jolla Playhouse in California and the Alliance Theatre in Atlanta have started programs that provide BIPOC fellows with salaries, benefits and the opportunity to work on major (and hopefully not just black) professional productions.

There’s obviously still a long way to go.  But as we move along, I hope we’ll all take the time to recognize and appreciate the vital work that all stage managers do. In the meantime, I hope they’ll accept this belated salute and my most sincere wishes that they—and you, dear readers—have a Happy Labor Day.