In Praise of "A Case for the Existence of God" 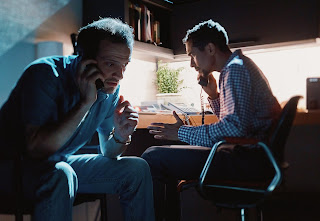 Samuel D. Hunter’s A Case for the Existence of God has been almost universally adored by the critics. And the play, which has just been extended at Signature Theatre through May 22, deserves that praise. It’s a beautifully written piece, beautifully directed by David Cromer and beautifully performed by the actors Will Brill and Kyle Beltran.

I’ve also been impressed with the many ways in which it speaks to the people who see it. One critic, recently a new father, was moved by the play’s loving portrayal of contemporary fatherhood. Another was taken by its sensitive depiction of male friendship.

I appreciated all that too but what made A Case for the Existence of God so special to me were its insights into the feelings of alienation that have so divided this country.

In some ways, you might call Hunter a bard of MAGA country (click here to read an inter view with him). It’s not that he’s an advocate for Fox News watchers but in play after play, Hunter has displayed an empathy for the white working class—be it the cashiers at a Hobby Lobby store in his 2010 breakout play A Bright New Boise, the wait staff in a chain restaurant like the characters in 2014’s Pocatello or the displaced miners in 2019’s Greater Clements.

These are the folks who feel as though the America their parents knew and that they expected to inherit is disappearing and that the world is leaving them behind. Paying heed to those fears and showing those people that they still have a place in our more diverse society might have made them less susceptible to troublemaking extremists in 2016 and on Jan. 6, 2021—and might yet make a difference in this year's important midterm elections.

Like all of Hunter’s plays, A Case for the Existence of God takes place in the playwright’s native Idaho. The specific setting this time is Twin Falls, a real city with a population of about 50,000 people, but the symbolism of its name shouldn’t be overlooked. The play’s two characters are Keith, a black mortgage broker; and Ryan, a white first-time buyer. Both are in free fall when we meet them.

Keith, who is college-educated and has a dual degree in Early Music and English, is gay and acutely aware of living in a place where black people are in a distinct minority. Ryan, who only made it through high school and works the line at a yogurt plant, is straight and desperately wants to buy some land that his ancestors originally homesteaded but that his family lost over the years.

You can almost see the banners of blue-state elite and red-state yokel waving over their heads. But Hunter doesn’t deal in polemics, even when making room for his characters to complain about their circumstances.

Although brought up in the comfort of a middle-class family, Keith still bears the emotional scars of being bullied for his race and sexuality by Ryan and his friends when they were in high school. The child of addicts, Ryan feels that he drew the shorter end of the stick. "I’m sure it was hard for you, growing up in this town, I’m sure it’s still hard to live in this town," he tells Keith. "But you know what else is hard?! Being in this town and being dirt fucking poor!"

But Hunter's plays work because he refuses to allow his characters to be identified solely by their grievances and instead digs deep into the specifics that reveal the humanity beneath their issues. Here it's that both Keith and Ryan are fathers. Keith is trying to adopt the little girl he’s been foster parenting since she was an infant. The recently-divorced Ryan is fighting for joint custody of his daughter.

Despite their differences, the men bond over their love for their children and the loneliness they both feel in a country that seems to save its best stuff for people who aren't them. “I think we share a specific kind of sadness,” Ryan tells Keith.

Although the actors never leave the cramped space of Keith's office, the narrative moves forward over several weeks (shout-out to the invaluable lighting design by Tyler Micoleau) as their characters struggle to negotiate the financial and governmental bureaucracies that will determine their fates.

I’m obviously not going to spoil the outcome for you.  But I will say that Hunter doesn’t just show empathy, he prescribes it. I think that what he's saying is that the only way we’re going to get out of our current political morass is to accept the ways in which people on all sides fail, to acknowledge and attempt to ease the pains each of us suffers and to join in celebrating the things we all cherish.

The saying goes that the devil is in the details, but in this play, the case for the hope that God represents is quietly but effectively made in the interstices between its lines. And that's what makes this such a work of wonder.

Labels: A Case for the Existence of God