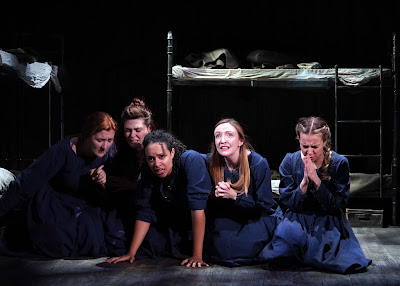 The girls aren’t what they’re expected to be in Belfast Girls, the new show that opened at the Irish Rep this week. They also aren’t what we’ve come to expect to find in historical dramas like this one set in 1850 during the Irish famine in which about a million people starved to death and twice as many fled the country in search of a better life elsewhere.

And the unexpected makeup of these characters in a history play is precisely what I so admired about this engaging drama by the British playwright Jaki McCarrick.

A 2012 finalist for the Susan Smith Blackburn Prize that honors female-identifying playwrights, Belfast Girls is inspired by the real-life program in which some 4,000 Irish women volunteered to be shipped to Australia, where they hoped to find husbands among its then-majority male population or to support themselves as servants (click here to read more about it).

The volunteers were supposed to be teenagers and “morally pure.” But many were considerably older and more than a few had worked as prostitutes. McCarrick’s play imagines the voyage for five of those women who share a steerage cabin during the then-three-month long journey.

Her women are strangers to one another at first but each has experienced the hardships of the potato famine and each has secrets she’s reluctant to reveal but that, no surprise, will come out over the course of the play as shifting alliances and dangerous rivalries develop among them. It’s the kind of costume drama in which the Brits excel.

But McCarrick adds some twists. One of the women is Jamaican, the child of a free black woman and a white settler, who ended up in Ireland. Two of the women fall in love. None of that should be remarkable but these kinds of stories seldom get told in these kinds of plays. And they’re particularly welcomed at a time when theater is vowing to be more inclusive.

I’ve seen lots of shows struggle with that. Many fall back on colorblind casting or making a supporting character gay. But McCarrick has realized that she doesn’t need to shoehorn people of color or queer people into history because they were there all along. Instead she simply weaves these storylines into her overall narrative, and does so without any pat-me-on-the-back fanfare.

The result is a fresh look at a period that has been viewed primarily through the eyes of straight, white men. Of course, none of this would matter if the storytelling were poor. But McCarrick has crafted a crackerjack tale filled with romance, suspense and ruminations on class struggle via references to Marx and Engels.

Aided by a terrific cast (there’s not a ringer in the bunch) director Nicola Murphy hits all the script’s emotional beats. And the creative team is onboard too. Particular shout-outs go to Chika Shimizu for her eye-catching set, China Lee for the smartly detailed costumes and Caroline Eng for the evocative sound design.

Some theatergoers have griped about the accents the actors adopt (a common complaint for Irish Rep shows) and, to be honest, a few people left during intermission at the performance I saw. But stay if you go—and you should—because Belfast Girls offers the kind of all-embracing and thoroughly satisfying look at history that theater really needs right now.