"Confederates” Surveys Some Common Ground Bridging the Past and the Present 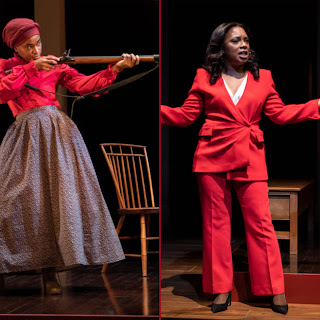 In the opening monologue of Confederates, now running at the Pershing Square Signature Center through April 24, a college professor runs down a list of popular culture centered around slavery.

“I have,” she says, “seen ‘12 Years a Slave,’ Slave Play, The Slave, another play— not the same, ‘Birth of a Nation,’ ‘The Birth of a Nation’ —very different movies,  Father Comes Home from the Wars, An Octoroon, ‘Harriet,’ ‘Underground,’ ‘Underground Railroad,’ ‘Amistad,’ ‘Sankofa,’ ‘Beloved,’ ‘Unchained Memories,’ ‘Uncle Tom’s Cabin,’ ‘Glory,’ and even ‘Django Unchained,’ though there are serious debates to be had over the qualifications of that last one.”

I took this litany to be playwright Dominique Morisseau’s sly way of commenting on how the people who green light movies, TV shows and plays seem to prefer stories about black people that are set in the past. It may also be her way of gently chiding the folks at the Oregon Shakespeare Festival’s American Revolutions project who, with Penumbra Theater, commissioned her to create a work about the black experience during the Civil War.

Morisseau is known for such nuanced plays about the contemporary black experience as Pipeline and Skeleton Crew (which just completed a short Broadway run in February) and for being an outspoken advocate for black people to call their own shots (the Playbill for Confederates includes a “Permission of Engagement” that says audience members are “allowed to laugh audibly and give all the ‘urn hmmms’ and ‘uhn uhnnns’ you feel inspired to give”). So it's no surprise that she has refused to be confined by the directive she was given.

Instead of restricting Confederates to the Civil War era, she has set the play in two time periods: the 1860s when an enslaved woman named Sara courageously undertakes the risky assignment of spying for the Union Army and the present when a political science professor named Sandra gamely tries to balance the complex challenges that come with being one of the few tenured black professors at an Ivy League-style college.

The idea, Morisseau has explained, is to show the continuum of the struggle that African-American women have had to wage to break through the restrictions that others impose on them (click here to read an interview with her).

That's a lot to pack into the play's 90-minute running time but under Stori Ayer’s nimble direction, the play hops back and forth between crisis points in the two women’s lives. And Kristolyn Lloyd as Sara and Michelle Wilson as Sandra, both veterans of previous Morisseau works, do a fine job of showing the grit their characters must summon up to combat oppression in each period.

The other three members of the cast do double duty as characters in both eras, changing costumes right in front of the audience as they move from one narrative to the other, with Sara’s quarrelsome runaway brother becoming one of Sandra’s quarrelsome students, while the high-strung daughter of the white plantation owner morphs into an overly woke white student.

But, alas, all that effort doesn't work as well as one might hope. It’s tough to draw an equivalency between the burdens that enslaved women experienced and the pressures that professional black women confront today.

Sandra’s frustration over a photograph in which someone has superimposed her head on the body of a slave woman with a white child suckling at her bare breast is understandable but it pales in comparison to the myriad ways in which a slave woman like Sara was routinely dehumanized.

Plus, Morisseau is clearly more animated by the freshness of the present-day story, which has Sandra grappling with both micro-aggressions from her white students and colleagues and unrealistic expectations from her black ones.

It's not that Morisseau's uninterested in the 1860 segments but she and Ayer depict them more broadly, causing them to come across like scenes from “Due North,” the over-the-top parody slave drama that the characters on the HBO show “Insecure” used to watch. It's as though Morisseau is saying it’s time to move on to other aspects of the black experience.  To which I say, Amen.