Riding High With "How I Learned to Drive" 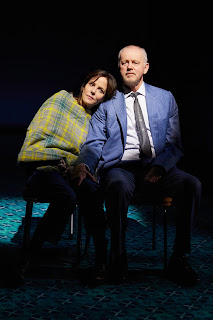 We’re in the midst of the spring crush when new shows are opening literally every night as they rush in to be considered for the awards that celebrate the end of each theater season.

So fifteen shows have been scheduled to open on Broadway this month and that doesn’t include the reopening of Mrs. Doubtfire, which Covid concerns shut down twice before, or the resurrection of the previously closed Beetlejuice.

Meanwhile at least eight attention-worthy productions have been scheduled for off-Broadway, including the National Yiddish Theatre Folksbiene’s production of Barry Manilow’s Holocaust-themed musical Harmony and the hot new version of Cyrano de Bergerac at BAM with a buff James McAvoy in the title role.

I’ve been running around to as many of them as I can to prepare for the awards nominating and voting I’m going to be doing over the next few weeks and, to be honest, I’m too exhausted to write about what I’ve seen as deeply as I like to do here. However, one thing has given me so much joy that I’ve had to find a way to share it with you. And that’s been the deservedly rapturous response to the Broadway debut of Paula Vogel’s How I Learned to Drive.

Ever since I first saw it at the Vineyard Theatre back in 1997, I have loved this memory play about the complicated relationship between a young girl and the uncle who sexually abused her. Its 2012 revival at Second Stage Theatre was also superb (click read to read my review of it) and caused me to start lobbying for the play to be included in what I call the Mount Rushmore of Great American Plays, right alongside Tennessee William’s A Streetcar Named Desire, Arthur Miller’s Death of  A  Salesman, Eugene O’Neill’s Long Day’s Journey Into Night and August Wilson’s Fences.            And yes, it really is that good.

This long overdue Broadway production of How I Learned to Drive stars Mary-Louise Parker and David Morse, reprising their roles from the original 1997 production and doing it once again under the direction of Mark Brokaw.

They, and of course the play, are as splendid as I remember they were and here’s the bottom line of what would have been my review of this revival: If you consider yourself a true theater lover, you should see it if there is any way that you can get to Manhattan Theatre Club's Samuel J. Friedman Theater before its run there is scheduled to end on May 29.

In the meantime, you can also listen to an interview about the show that I had the great privilege of doing with Vogel for "All the Drama," my BroadwayRadio podcast on plays that have won the Pulitzer Prize. You can find it by clicking here.

Labels: How I Learned to Drive

I so remember this show's debut. And Paula Vogel is about as massive a talent as that of any era.