The Oddly Experimental Experiences Of "Bad Penny" and "Sincerity Forever" 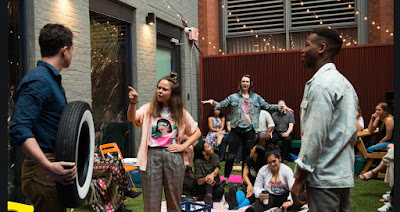 If you go to the theater regularly enough, you eventually figure out what kinds of show appeal to you and which don’t.  My sister is an unabashed fan of jukebox musicals. My best friend likes naturalistic plays, especially those that make him cry. Another friend prefers shows—be they straight plays or musicals—that center around characters who are gay or people of color.

I like to fancy myself open to all different kinds of theatrical experiences.  But I have to admit that I do have a hard time with experimental theater.  So every once in a while, I try to push myself outside my comfort zone by seeing some experimental or performance art piece. Which is how I found myself at The Flea Theater seeing a double bill that is part of the five-play Perfect Catastrophes Festival that The Flea is dedicating this fall to the playwright Mac Wellman (click here to read more about him).

One of the original co-founders of The Flea, Wellman is known for what a critic once described as work that “rebels against theatrical conventions, often abandoning such traditional elements as plot and character altogether.”

That is a big challenge for someone like me who thrives on narrative. And that must have been apparent because during the one-hour break between the two shows, another reviewer violated the critics’ code of not talking about a show while you’re in the theater and ambled over to ask me what I thought of what we’d just seen. As I told him, I’m not sure.

The first of the two plays is Bad Penny, which was created as a site-specific piece that was performed in Central Park when it premiered in 1989. It involves a guy who is trying to get his car tire fixed, a woman who has a penny that she believes brings bad luck and the different kinds of New Yorkers they encounter.

The actors playing the New Yorkers are embedded in the audience and so part of the experience is figuring out who’s going to speak out next—and who to listen to since several conversations go on at the same time.

At one point, a silent Golem-like character, who is listed on the one-sheet program as “Boatman,” appears and dominates the action.  I guessed he’s supposed to be death. But who knows?

The cast, directed by Kristan Seemel is composed primarily of members of the Flea’s resident company The Bats and their acting is up and down, with some Bats seeming to be as befuddled by what was going on as I was.

Still, the show is done in the outdoor courtyard of The Flea’s relatively new home on Thomas Street in Tribeca. It was a summery evening the night I saw it, sitting on one of the lawn chairs arrayed around the space (later comers had to settle for blankets on the floor) and the 45 minutes passed pleasantly enough and might have done so even more if I’d gotten a drink at the cash bar set up in the corner before the performance began.

I’m not sure why the break between the shows was an hour long because Sincerity Forever, the second part of the bill, was performed inside in the small underground space known as The Siggy, in honor of Flea co-founder Sigourney Weaver, and performed by an entirely different and, under the direction of Dina Vovsi, a somewhat more skilled group of actors.

The set-up for this 1990 play is a fictional southern town, populated by Christian zealots, hood-wearing Ku Klux Klan members and, strangest of all, Jesus who in this incarnation is both black and female.

The satire here is more obvious (characters keep insisting that any behavior should be considered acceptable so long as it's sincere). And, of course, it's sadly more relevant.

After the initial unease of seeing the hood-clad actors wore off a bit, the audience seemed more into this show than those seeing Bad Penny had been. Me too.  At least I think so.