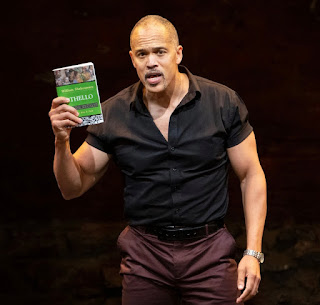 Just about every theater company is wrestling with the questions of how to increase the diversity of their audiences and the representation on their stages. In the meantime, though, a growing number of black and brown theater makers are grappling directly with the white gaze that results from having predominantly white audiences view their work and mostly white arts administrators vet it.

Jackie Sibblies Drury’s Fairview cleverly confronted its largely white audiences and won this year’s Pulitzer Prize for Drama. And now American Moor, a meditation on how to interpret Shakespeare's Othello that played at the Wild Project five years ago, has returned in a Red Bull Theater production that is running at the Cherry Lane Theatre through Oct. 5.

I recognize that as a black woman, I'm probably not the target audience for these shows but they have caused me to think yet again about how complicated it can be to have these discussions about race. American Moor is written and performed by Keith Hamilton Cobb, an actor whose program bio suggests that he’s been most successful doing TV but who, he makes clear in this autobiographical show, has a longstanding love for Shakespeare.

Cobb, now 57, tells us that since his early acting days, he has yearned to play Hamlet, Romeo, Richard II, even A Midsummer Night Dream’s fairy queen Titania (click here to read more about the actor). But others have seen him differently.

Cobb’s tall, impressively chiseled physique (including cannonball-sized biceps); a resonant voice that reflects his classical training at NYU’s Tisch School of the Arts and the fact that he is black have made casting agents and directors for Shakespeare productions want to cast him almost solely as Othello. This nearly one-man show pivots around the fact that their vision of the character often conflicts with his.

American Moor simulates an audition in which Cobb nervously prowls the stage before the show actually begins. Once it starts, he performs bits of Othello’s speeches as he tries out to play the Moor in a production helmed by a white director (Josh Tyson) who is embedded in the audience and full of ideas about how the part should be played.

But most of the action takes place inside the auditioning actor’s mind as interior monologues that, aided by Alan C. Edwards' lighting and Christian Frederickson's soundscape, he delivers to the audience, comparing Othello’s life to his own and fuming about a young white guy telling an older black guy how to portray one of the most famous black guys in the theatrical canon.

Many of Cobb’s observations are insightful. He draw parallels between Othello and contemporary African-American achievers like Colin Powell and even Barack Obama, who simultaneously recognize their own strengths and that those strengths—be they physical or intellectual—may be seen as threats to the whites who surround them and who have expectations about the behavior of black men.

Meanwhile, the director wants Othello portrayed as an insecure man whose feelings of inadequacy and a compulsion to prove his manhood eventually boil over into murderous rage. It might seem a subtle difference but it’s a significant one: the tension between the way black people see themselves and the way white people, even well-meaning ones, see them.

Some critics, all of them white men, have complained that the actor’s response is out of proportion to what the director asks him to do. Having often been in similar situations myself, I understood what the actor was feeling. I just wish that Cobb had found a way to make his point more concisely. Instead under the direction of Kim Weild, who is, ironically, a white woman, he repeats the same arguments over and over, making the show’s 85 minutes seem far longer than they are.

Not that the audience seemed to mind. More integrated than is often the case for small off-Broadway shows, the audience at the performance my husband K and I attended was still majority white. And some of them seemed to be competing with one another to show how much they were in on the message that Cobb was trying to get across. The white woman seated behind me kept uh-huhing her approval as though she were at a church revival. Others leapt out of their seats to lead the curtain call.

It seemed to me as though they hadn’t really thought through what Cobb was saying, hadn’t fully considered whether they’d ever “othered” black or brown people themselves, hadn’t realized that Cobb might be describing their behavior. But I suppose I could be accused of the same kind of pigeonholing as I write here about them. As I said, talking about race is complicated.