This Spin on "BLKS" May Be Too Colorful 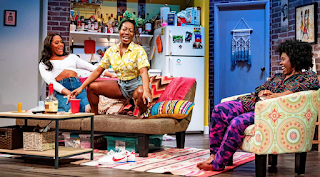 Sometimes I think the “O” in writer-director Robert O’Hara’s name stands for “over the top.” For while red, blue and yellow may be the primary colors for most of us, his are magenta, indigo and chartreuse. The productions he creates from this palette run the gamut from extravagantly vibrant to flamboyantly garish. And yet artistic directors (and many theatergoers) love O’Hara. Over the past five years he’s written and directed three New York productions and served as director for three others, including BLKS, the first play by the young poet Aziza Barnes which is running at MCC Theater’s Robert W. Wilson space through June 2.

The simplest way to describe BLKS would be to say that it’s an African-American riff on the TV shows “Girls” and “Sex and the City.” Its protagonists are three women in their early 20s who share an apartment in Brooklyn and a taste for fabulous outfits (created with a sly sense of humor by Dede Ayite). Two of them have artsy careers and the third is an accountant. All three have relationship issues.

Filmmaker Octavia loves having sex with her girlfriend Ry but is more preoccupied with a mole she finds on her own clitoris at the beginning of the play. Genial performance artist Imani seems desperately single while also futilely trying to develop an act around some classic Eddie Murphy comedy routines. And the high-strung June is smart enough to have just landed a six-figure job with a major firm but dumb enough to be cheated on repeatedly by her boyfriend.

The play unspools in a series of short scenes in which the friends try to forget their woes with a night out on the town at a hot club. Awkward situations and supposedly lots of laughs ensue.

But O’Hara paints with broad strokes that underscore how potty-mouthed and raunchy the women are (a woman in the row in front of me climbed over six other people to walk out during one particularly vivid sex scene). And that undermines what Barnes is trying to say about the extra burdens so many young black women bear. For underneath the friends' bravado is a churning unease about how the world sees them and how that forces them to see themselves.

Different productions at Chicago’s Steppenwolf Theatre and Baltimore’s Woolly Mammoth Theatre, both helmed by the female director Nataki Garrett who was recently named artistic director of the prestigious Oregon Shakespeare Festival, drew high critical praise for their sensitive mix of comedy and drama.

O’Hara, however, hits so hard on the humor that the challenges the women face (Imani’s encounters with a not-so-woke-as-she-thinks-she-is white woman, June’s dismay over the news of yet another incident of police brutality against an unarmed black man) get overshadowed and the intended epiphanies fall flat.

The actors, particularly the endearing Alfie Fuller as the perpetual wingman Imani and the charming Chris Myers as a nice guy the women encounter but are too obsessed with their own angst to truly appreciate, give fully committed performances. But they all engage in far too much shouting, neck rolling, butt twerking and other behaviors that, to be honest, would be called out as racist if the director weren’t black.

Even the usually-deft Clint Ramos is off his game, delivering a clunky set. To be fair, he’s given a tough assignment because the action moves from various rooms in the women’s apartment to locations inside and outside the club. Ramos' solution is to squeeze most of the locales onto a slow-moving roundtable.

Still the young people—both black and white—at the performance I attended yowled with delight at the jokes—and at the butt twerking. I always appreciate having young people in the audience and I don’t begrudge them the enjoyment BLKS gave them. I just wish they and I had seen a production directed by someone else.