"Entangled" is an Involving Look at Grief 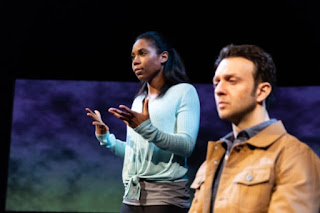 There were over 300 mass shootings in the U.S. last year and we’ve already passed 100 this year, according to the Gun Violence Archive, which tracks gun-related deaths in this country. The aftermath of one such shooting is the subject of Entangled, a two-hander that The Amoralists opened at A.R.T./New York Theatres this week but that is currently scheduled to run only through next weekend.  Which is a shame because it’s a truly moving meditation on grief and guilt.

Directed with elegant simplicity by Kate Moore Heaney, the story is told in a series of interlocking monologues spoken by the single mom of a little girl killed in an imagined shooting at the American Museum of Natural History and the brother of the man who shot her and 46 others.

Charly Evon Simpson wrote the dialog for the mother Greta, a black woman who has worked her way up the corporate ladder but who has still centered her life around the child she named Astrid. While Gabriel Jason Dean created the speeches for Bradley, a white gay man, six years older than the brother he affectionately called Little.

Greta and Bradley take turns standing centerstage in a bare playing space furnished only with a straight-backed chair and relate their memories of the past (the way her small daughter would snuggle in bed with her in the mornings; the way he tried to protect his little brother from their macho dad) and their struggles to deal with the present (callous inquiries from the media, awkward gestures of comfort by friends).

Each is ravaged by the incident but it’s hard not to feel most for Greta. It’s partly the situation. Dean carefully details the emotional fallout of the shame, anger and continuing love Bradley feels for his brother. And James Kautz, the founding artistic director of The Amoralists, plays the character sympathetically. But neither can explain what we most want to know: why Bradley’s brother, or anyone, would commit such an horrendous act and why the people around him didn’t see the warning signs and stop him.

Simpson has an easier job with Greta. After all, who wouldn’t empathize with a mother’s anguish over the murder of her young child?  But Simpson, who also wrote the sensitive play Behind the Sheet (you can listen to my interview with her here) doesn’t make the character one-note. Her Greta is often as funny as she is furious and Naomi Lorrain gives a smashing performance that vibrates with emotional authenticity.

This is far from the first show to confront mass shootings (click here to see a list of others) but it’s one of the most effective—and least exploitive—of the dozen or so I’ve seen over the last 10 years. And I wish there were time for more of you to see it.