My Last "King Lear"...At Least for A While 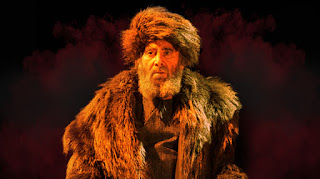 Traditions says that King Lear is the most difficult role in the English-speaking theatrical canon. So as soon as actors hit their 50s, they start itching to take on the challenge. Which explains why there always seem to be so many productions of King Lear. And it also explains why I've seen so many of them, including the Royal Shakespeare Company's current one, now running at BAM's Harvey Theater though next weekend.

I'd told myself that after having seen Derek Jacobi, Kevin Kline, Frank Langella, John Lithgow, Joseph Marcell, Christopher Plummer, Sam Waterston, and some others I can't even remember, I was going to give the play a rest. But when my theatergoing buddy Bill suggested that we see Antony Sher's interpretation of Shakespeare's mad and foolish king, I found I couldn't resist.

Besides being a celebrated Shakespearean actor, Sher is also a fine writer who has chronicled his experiences playing such iconic characters as Falstaff and Richard III. So I ordered tickets and a copy of his latest book, "The Year of the Mad King, which talks about his take on Lear (click here to listen to an interview with the actor). Alas, the new memoir, which focuses more on Sher's personal life than his preparation for King Lear, is the weakest of his books and the production isn't much stronger.

To be fair, King Lear has been done so much that it's hard to come up with anything new, as the book "Performing Lear," an analysis of 30 or more of the most significant performances over the last 70 years, makes clear (click here to see more about that book). Still, Gregory Doran, the RSC's artistic director and Sher's husband, tries.

Doran has put together some striking set pieces, including a majestic entry for Lear at the beginning of the play and a memorable scene in which a bunch of the king's rowdy knights abuse the hospitality of his eldest daughter Goneril, strengthening the case for why she and her sister Regan might be fed up with their father.

And the director has thoroughly integrated the cast (the prime roles of Lear's faithful youngest daughter Cordelia and his minister Gloucester's duplicitous son Edmund are both played by black actors). He's also come up with staging innovations that uses supernumeraries to play the wretched residents of Lear's kingdom and a big Plexiglas box that's probably supposed to symbolize something but, in all honesty, I can't figure out what.

Sher's Lear makes his first appearance sitting on a throne in that transparent box, which is initially brought in on the shoulders of four brawny litter carriers. Dwarfed by the large fur-trimmed robe he's wearing, this king might be mistaken for a little boy playing dress up if not for his gray beard.

The combination of the character's childish petulance and his dread of aging and his own mortality are used to fuel his decision to divide his kingdom among his three daughters, determining how much each will get on the basis of the declarations of love for him he forces them to give. This sets off the chain of jealousies and rivalries that will lead to the ruin of them all.

As you might expect from an RSC production, nearly everyone, from Sher to the actors playing the servants, speaks the Bard's lines beautifully. I admired them for it, particularly Paapa Essiedu, the RSC's sleek rising star who infuses Edmund with a disaffected disdain for both his enemies and his allies (click here to read more about the actor who is also slated to play Hamlet at the Kennedy Center next month).

But none of the performances made me feel anything even though this is perhaps the saddest of Shakespeare's plays. That's no doubt because Doran and Sher have deliberately downplayed the histrionics that have enlivened—or overwhelmed—other Lear productions.

It may be a smart choice but watching this King Lear made me realize that sometimes, particularly with an old warhorse like this one, a little fanfare helps. And although the timing is unfortunate since the Bard's birthday is tomorrow, it also made me think that it may be time for me to take a break from Shakespeare. So I'm declaring a six-month moratorium on seeing any of his plays.  We'll see how long I can resist.