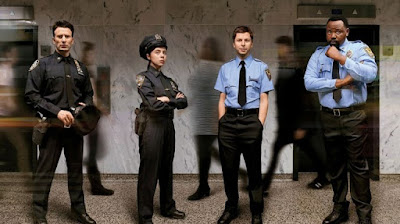 Few things make me happier than seeing my husband K enjoy a good laugh while he's watching a show. And so that alone would be reason enough for me to cheer the revival (and Broadway debut) of Kenneth Lonergan's Lobby Hero, which is now running at Second Stage Theater's newly renovated The Hayes Theater through May 13 (click here to read more about the renovation).

However, there are also other reasons to cheer on this comic tragedy's deep dive into the complexities of power, morality and loyalty. Set in the lobby of an apartment building, it explores the interconnecting stories of a sad-sack security guard named Jeff, his by-the-book supervisor William and two beat cops, the macho veteran Bill and his female rookie partner Dawn.

Two things tie this foursome together: sexual rivalries over Dawn and a horrendous crime that involves a relative of William's. Now, I know none of this sounds funny but Lonergan has an ear for dialog and a taste for the ribald that rivals that of Stephen Adly Giurgis or David Mamet. His characters are laugh-out-loud funny even when they're just trading remarks about something as prosaic as who should sign the building's guest book.

But the primary question they're dealing with is deadly serious: is it more moral to tell the truth or to lie when you know that the system is stacked for or against someone because of their gender or the color of their skin?  The characters know that neither option is entirely right and the achievement of this production is that it makes the viewer feel just as conflicted.

I saw Lobby Hero when it played at Playwrights Horizons back in the spring of 2001 and I wasn't all that impressed. Maybe it's all the recent stories about workplace harassment or the increased attention to the legal system's mistreatment of black men but I responded viscerally this time. I actually squirmed in my seat as the characters made their choices, whether those decisions reflected good intentions or naked self-interest.

Much of the credit for that must go to director Trip Cullman who remains surefooted as he walks the tricky path Lonergan has laid out. Cullman is aided by David Rockwell's revolving set, which subtly mimics the characters' and the audience's shifting perspectives; and by a crackerjack cast, drawn primarily from movies and TV but still displaying impressive stage chops.

Most of the media attention has gone to Chris Evans, taking a break from his role as Captain America in the Marvel superhero movies to play the alpha-male Bill. It's a juicy role, full of swagger and bravado and Evans has fun with it. But he's stage wise enough to know that he could upset the delicate balance Lonergan and Cullman have established and so he doesn't push too hard (click here to read an interview with the actor).

Despite a tendency to talk a little too fast, Brian Tyree Henry, best known as the rapper Paper Boi on the FX sitcom "Atlanta," brings a world-weary naturalism to William that grounds the play in the realities of how difficult it can be to break out of the role that society so often assigns black men.

The British actress Bel Powley is a touch too wide-eyed for me, although that quality makes Dawn's determination to hold her own with the boys all the more poignant.

But it's Michael Cera who emerges as first among equals in this quartet. Skinny and nerdy looking, Cera has made a career out of playing beta-male losers. Here, his Jeff is the quintessential Lonergan protagonist who is eager to be seen as one of the guys but aware enough to know that he never will be.

It's an award-worthy performance and Lonergan has already signed up the actor, who also starred in the revival of This is Our Youth in 2014, for this fall's revival of his play Waverly Gallery, which will also mark Elaine May's return to the stage for the first time in 19 years, which is something else to cheer.