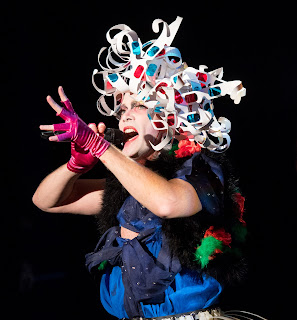 The gender-fluid performance artist Taylor Mac isn't so much doing a show as he is hosting a party with A 24-Decade History of Popular Music, which is playing at St. Ann's Warehouse only through Oct. 8. And in the process he is redefining drag.

Mac has set himself (he actually prefers the gender-neutral pronoun "judy" but I just can't do it) the ambitious task of telling the history of this country through its popular songs. And to do it he has created an extravaganza of a show that includes transvestite ushers, nude burlesque dancers, a hard-swinging jazz band, audience participation, puppets and Mac's sublime ballad singing.

This is not your standard lip-sync-Marilyn-Judy-and-Liza drag show. Mac (click here to read a profile of him) builds an hour around 10 or so songs, some classics and others forgotten, that were popular in each decade dating from the founding of this country until the present day. That adds up to 246 songs and 24 hours.

A marathon performance of the whole shebang is scheduled to start at noon next Saturday, Oct. 8, but Mac has also divided the show into eight three-hour segments and my theatergoing buddy Bill and I caught Part VI, which covers 1926-1956 and which I selected because I wanted to see how he did with the heart of the Great American Songbook.

He does great. He camps it up with total abandon one minute (the conceptual artist known as Machine Dazzle did the Carmen-Mranda-meets-a-tornado costumes) and in the next minute, he delivers moving renditions of classic songs, including Carousel's "Soliloquy," all beautifully arranged by Mac and his musical director Matt Ray (click here to read about how the numbers were chosen).

There's also a loose narrative constructed by Mac, the dramaturge Jocelyn Clarke and the show's co-director Niegel Smith that allows Mac to ramble on, untethered by a script, about America's long history of mistreating blacks, Hispanics, Asians, the poor and gays.

At one point in our show, Mac had whites sitting in the center section recreate the sad scenario of white flight by having them get up and leave their seats to the few people of color in the audience. People playfully complied but the underlining point was serious.

Mac told us we were lucky that there were chairs at all because he'd wanted to clear the floor of them so that people would feel free to dance. Some folks moved into the aisles and did so anyway when the band played tunes like "Pachuco Boogie."

I'm not a big audience participation fan (in fact, I detest the practice) but Mac creates such a joyous environment that I found myself joining in his sing-alongs and cheering the folks he brought up onstage to serve as his foils.

When I didn't want to participate, even tacitly, I could (and did) get up and go to the restroom or the bar. The show runs without any formal intermission and so folks are encouraged to come and go as they need. Mac snatched a breather (and maybe his own bathroom break) during the parade of burlesque dancers that featured people of all genders and body types.

The best moments of the show were those when the lights went low (shoutout to lighting designer John Torres for his mastery in guiding the eye exactly where it needed to be) and Mac just sang. He has an incredibly appealing voice and the songs were a reminder of how much we all love tunes with catchy melodies and witty lyrics.

Those moments made me curious about the other decades. The couple seated next to Bill and me had wasted no time in letting us know that they'd opted to see the entire cycle, albeit by taking in each of the three-hour shows instead of next weekend's marathon.

I don't know if I'd have the stamina (or the money) to do either but I'm glad for the three hours I got. And the merriment continued right through to the end.

On the way out, we were given our programs by my favorite of the ushers—a burly, bearded guy wearing a replica of the dress that Judy Garland wore in "The Wizard of Oz." After just three hours in Mac's world, he didn't look odd at all.