Counting Me Out of "The Encounter" 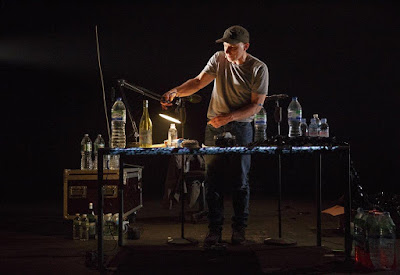 Immersive experience is the phrase that everyone keeps using to describe The Encounter, the unusual one-man show that is playing a limited run at Broadway's Golden Theatre through Jan. 8 when it's scheduled to take off for other parts of the country.

The show, which is based on a novel inspired by the American photographer Loren McIntyre's travels in the Amazon, was conceived, directed and is performed by the British actor Simon McBurney. But its real star and the source of the immersion is the audio system that plays three-dimensional sound through individual headphones that are hooked up to each seat in the theater.

And these aren't just regular earphones. Their clarity is sharp and their high-def technology allows sound designers Gareth Fry and Pete Malkin to aurally evoke McIntyre's experience during the two months he spent with a then-reclusive tribe known as the Mayoruna (click here to read about them and the making of this show).

The surround-sound design makes the rustle of tree leaves, the buzz of mosquitoes and the incantations of the native people all sound as though they are happening right over your shoulder. Or at least that's the way all the articles published before the show opened told me I was supposed to feel. And I did. It just didn't seem as big a deal as everyone kept saying it was.

But I may not have been the best audience for this show. I routinely spend three or four hours a day listening to podcasts or radio shows and while the quality of my personal earphones aren't up to The Encounter's level, I'm a bit jaded when it comes to being transported into some other world by sound.

It might have been different if I'd found McIntyre's story compelling but the two-hour tale of a white guy being seduced by the rituals of noble savages and engaging in various hallucinogenic ordeals that help him see the world in a new way struck me as the same-old-same-old. Maybe it was better in the book but in the theater, my mind wandered.

Integrated into the narrative are moments in which McBurney talks directly to the audience or pretends to be having conversations with his young daughter. I'm guessing these scripted interruptions are supposed to be meta-commentaries on the nature of reality but I found them to be distracting.

A shorter play might have helped to keep me—and it—better focused. Instead, this one rambles on for two intermissionless hours and then kind of dribbles to an end. "Did I miss something?" a befuddled man asked his companion, as they made their way out of the theater.

Still McBurney, co-founder and artistic director of Complicite, a 30-year-old company that specializes in sensual and surrealistic theater, is an affable guy and a committed artist.

At the beginning of the evening, he encouraged people to shut their eyes so that they could sink into the immersive experience. I did. So who knows, maybe everything I've written here about my experience is the result of a fever dream.