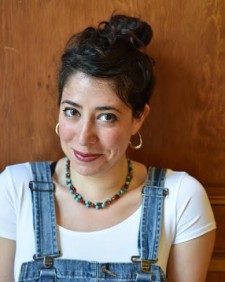 Since getting her B.A. at NYU's Tisch School of the Arts and an M.F.A from Columbia University barely a decade ago, Rachel Chavkin, whose acclaimed production of Natasha, Pierre and the Great Comet of 1812 will debut on Broadway this fall, has built a reputation as one of the most inventive directors on the New York theater scene. And nowhere are her gifts more evident than in the production of Bess Wohl's comic drama Small Mouth Sounds, which opens at the Signature Center next week.

I don't usually write about shows before they officially open but Chavkin mounted this show about the emotional journeys of six people at a silent retreat at Ars Nova last year. It sold out then and I couldn't get a ticket. So I grabbed a couple as soon as I heard there would be a return engagement this summer and I'm just as eager to report that my theatergoing buddy Bill and I had a great time.

Like Annie Baker's Circle Mirror Transformation, in which strangers interact at a weekly drama class, and Luigi Pirandello's absurdist classic Six Characters in Search of an Author, Wohl's play throws a bunch of folks together and sets them the existential task of figuring out who and why they are (click here to read an interview with the author). The result is both hilarious and heartbreaking.

Chavkin, also a major force behind Hadestown, which is running at New York Theatre Workshop through July 31 (click here for my rave,) specializes in visceral theater that refuses to be constrained by the proscenium and she's an ideal conductor for this quest (click here to read more about her).

She's had the space in the Romulus Linney Courtyard Theatre reconfigured so that the audience sits on both sides of the playing space surrounded, kudos to set designer Laura Jellinek, by wood panels and white screens that evoke the calm of a New Age spa.

Nature images assembled by video designer Andrew Schneider are projected on the big screens that run the length of the room and they're accompanied by a near continuous underscoring of bird, cricket, rain, wind and other soothing outdoor sounds (a shoutout here to sound designer Stowe Nelson). 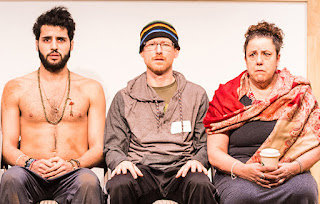 And Chavkin is just as deft and specific with her actors. Half the cast has changed since the Ars Nova production but they—Babak Tafti, Brad Heberlee, Marcia DeBonis, Max Baker, Quincy Tyler Bernstine, JoJo Gonzalez, and Zoë Winters—are all terrific.

One actor has an extended nude scene. Another is never seen until the curtain call. Several are required to cry at the snap of a synapse. And all are occasionally charged with playing some scenes simultaneously, with the audience subtly nudged where to look by Mike Inwood's nimble lighting.

But the major challenge for the actors is to tell their stories and, just as importantly, their backstories (the reasons they're seeking solace at the retreat) almost entirely through their facial expressions and body gestures since their characters are supposed to be silent. It's a real workout and they not only obviously love doing it but ace it as well.

The pleasure for the audience—and there is much of it to be had —is in putting all the pieces together. Some click into place easily; others are more satisfyingly jagged.

At almost two hours without intermission, Small Mouth Sounds is a bit long but it's also nirvana for smart theatergoers.