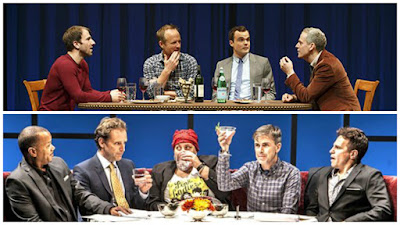 For years now, gay-themed plays have centered around the angst of coming out or the agonies of the AIDS crisis. But we now live in an era when gays and lesbians can openly serve in the military, get married and win political office as Jackie Biskupski recently did in, of all places, the Mormon capital of Salt Lake City.

So I suppose it should come as no surprise that, within just days of one another, two new gay plays opened that have nothing to do with discrimination or medical devastation.

Instead, both Peter Parnell's Dada Woof Papa Hot, running at Lincoln Center Theater's Mitzi E. Newhouse theater through Jan. 3, and Mark Gerrard's Steve, playing in a The New Group production in The Romulus Linney Courtyard Theatre at the Pershing Square Signature Center through Dec. 27, take on the more contemporary issue of gay parenthood.

Gerrard once took a playwriting course with Parnell and the plays are so similar that I would have thought one of the playwrights had plagiarized the other if they hadn't told The New York Times that each had been completely unaware that the other had been writing a play about gay dads (click here to read their joint interview).

Each show opens with a dinner at a tony restaurant (one thing that doesn't seem to have changed from the old days is that the characters are affluent and mainly white) where the main couple, fathers of a young child we never see, are dining out with another couple whose lives (or at least their sex lives) sound more exciting.

Sparks inevitably flare and with them the possibilities of a dalliance that might have seemed OK in the early post-Stonewall days but is more problematic in these family-centric times.

The main couple in Dada Woof Papa Hot (the title refers to the purported first words of their daughter Nicola) are Rob, a shrink; and Alan, a freelance writer. Rob, played with cozy menschiness by Patrick Breen, is comfortable as both the family's primary breadwinner and Nicola's biological father. Alan, the wonderfully layered John Benjamin Hickey (click here to read a Q&A with him), is antsier in his role as primary caregiver.

Although their best friends are a straight couple who are having their own marital issues, Alan and Rob start spending more and more time with a younger gay couple and Alan finds himself flattered when the hipper—and hotter—of those younger dads starts paying attention to him.

It's the kind of soap-opera set-up that has fueled legions of movies and TV shows, but with the twist that the characters going through these familiar motions are also struggling to redefine what it now means to be gay.

Parnell, who is 62, has admitted that his show is based, at least partly, on his own life (he's married to a shrink and they have a daughter) and his version of the story, at least as directed by Scott Ellis, is the more conventional of the two productions, with the straight best friends serving as a reminder for straight audience members that we're all alike regardless of whom we sleep with.

Perhaps reflecting the fact that its author is 15 years younger than Parnell, there are no straight characters in Gerrard's Steve, so titled because four characters, including the main couple, share variations of that name.

The best friend of the main Steve—Matt McGrath in another standout performance—is a lesbian and, at least in this production, smartly directed by Cynthia Nixon, one of his other pals is a black guy. There's also a young Argentinian waiter named Estaban, who, in a running gag, keeps popping up wherever they all go to eat.

Gerrard's take on the gay dads story is generally more playful, with all of the characters making unabashedly campy references that wouldn't have been out of place in the uber-gay play Boys in the Band and punctuating their remarks with show tunes. In fact, the cast is onstage singing when the audience enters the theater.

It's as though Gerrard wants to make it clear that gay men don't have to give up all the things that were a part of their old pre-marriage culture. And yet the dilemma remains much the same: how do people who fought so hard to be proud of their status as outsiders adapt now that they're being allowed inside?

I felt a little like a teacher evaluating student assignments on the same theme as I watched the two plays try to answer that question on successive evenings. It's also been interesting to see how critics have, even more than usual, responded to the shows on the basis of their own life's experiences, particularly their sexual orientation and marital status (click here to see a roundup of reviews).

As regular readers know, I'm straight, happily married to my adored husband K and childless. I found Steve to be fluffier than Dada Woof Papa Hot but I enjoyed it more (plus, as a black woman, I didn't particularly appreciate the latter's condescending reference to a Jamaican nanny). If you're not up for seeing both, I'd go for the one that offers the most fun.