"Dames at Sea" Has Missed the Boat 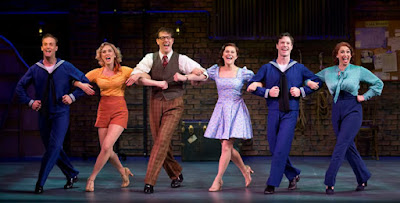 Joe Cino, who turned a gay coffeehouse into a theatrical haven for audacious playwrights like John Guare, Sam Shepard and Lanford Wilson during the 1960's, famously introduced each evening's free performance at his Caffe Cino with the phrase "it's magic time."

One of his cafe's final and perhaps most magical shows was a spoof of Hollywood musicals called Dames at Sea, which made a star out of a youngster named Bernadette Peters and became such a hit that it went onto a long commercial run, won 1968 Drama Desk and Outer Critics Circle awards, and was even turned into a TV movie starring Ann-Margret.

So there was understandable excitement among theater nerds, including my buddy Bill and me, when it was announced that the show would finally make its Broadway debut at The Helen Hayes Theatre this fall. But, alas, it seems the magic has gone.

Dames at Sea, with book and lyrics by George Haimsohn and Robin Miller and a pastiche score by Jim Wise, still pokes fun at the old backstage musicals in which a plucky chorus girl becomes an overnight star while also finding the man of her dreams, all against a backdrop of splashy Busby Berkeley-style production numbers and silly plot twists (the theater is being torn down, the U.S. Navy rides to the rescue).

But these kinds of self-referential shows have become so plentiful and the budget for this version of Dames seems so minimal that the show never achieves the giddiness that is its only reason for being. If you're going to do a retro show like this you need to really go for it, in the tongue-through-cheek style of a Drowsy Chaperone.

Randy Skinner, who both choreographs and directs Dames at Sea, tries to amp things up with every trick he learned from having choreographed such Dames descendants as the 2001 revival of 42nd Street and the constantly returning productions of Irving Berlin's White Christmas but that's hard to do when you've got a cast of 10, compared to the 30-50 for those previous shows.

Skinner devises an impressive variety of high-energy tap-dance routines but the dancers look lonely up there doing them. And yes, I know that there were only six people in the cafe's original 1968 production but that was in a much, much smaller venue.

The current cast is game (each one has a nice voice and fast feet) and vets like John Bolton as the show-within-a-show's harassed stage manager and Lesli Margherita as its temperamental star have no shame when it comes to milking laughs but there are no standout performances that make this a must-see.

The sets seem kind of generic and I couldn't even find interesting feature stories about the show to link to. All in all, this production has as much excitement as one of those national tours that's been on the road for a long time.

In fact, the underlying concept for this production seems somewhat unmoored. Its references to the musicals of the 1930s (the leading lovebirds are  named Ruby and Dick in homage to that era's song-and-dance stars Ruby Keeler and Dick Powell) are unlikely to strike a chord with the folks who are name checking the rapper Biggie Smalls in Hamilton. And people who like their musicals light on their feet can find more satisfying fixes in Aladdin and American in Paris.

I still wish I'd been able to see the original production of Dames at Sea but this production has missed the boat.