"Permission" is Too Self-Indulgent 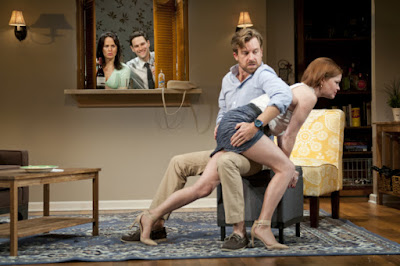 Everything, including playwrights, gets branded these days. And Robert Askins has glommed onto what's turning out to be a surprisingly marketable one: he's the “religion guy.”

Hand to God, his play that centers around the members of a church puppet ministry, is up for four Tony awards, including Best Play. Permission, his latest work which is being given a world premiere at the Lucille Lortel Theatre by MCC, deals with religion too but it’s unlikely to be picking up any prizes.

Permission draws its inspiration from Christian Domestic Discipline, a supposedly real practice (although its website looks a little hoaxy to me) in which religious couples are supposed to adhere to Bible teachings that grant husbands controlling authority over their wives, including the right to spank them.

It’s that last part, of course, that titillates Askins. Permission opens at a dinner party at which a couple, Eric (Justin Bartha) and Cynthia (Elizabeth Reaser) discover that their male host Zach (Lucas Near-Verbbrugghe) regularly spanks his wife Michelle (Nicole Lowrance) when he feels she's misbehaved—and that Michelle not only likes the spankings but encourages them. They're doing it for Jesus, both she and Zach explain.

In no time at all, Eric and Cynthia, whose marriage has been a little shaky, take up the practice and find that it’s a real turn on in both their personal and professional lives. They have hot sex. Cynthia makes progress on a long-delayed novel; Eric displays a new boldness at the college where he teaches, pushing for a promotion and flirting with his young student intern (Talene Monahon).

Director Alex Timbers, who seems more at home with the musicals he’s directed like Bloody Bloody Andrew Jackson and Here Lies Love, has his game five-member cast whirling around the Lortel’s small stage (which set designer David Korins has chosen to make even smaller) as the men find the slightest reason to  throw the women over their laps and wail away, the women wriggle in ostentatious pain and pleasure and, as in any farce, people end up with unexpected partners and doors get slammed.

But it all rings kind of hollow. Except for the resounding slaps on the women’s rumps. After a while, I began to worry about the damage being done and so was relieved when I came across an article explaining how costume designer Paloma Young had padded their outfits to blunt the blows (click here to read about how she did it).

Askins is a talented guy and he does touch on some observations about the shifting dynamics of modern marriages and the changing definitions of masculinity but he’s so busy making fun of evangelical beliefs and behaviors that he doesn't develop those larger themes.

And we know he could have. Cause Lord knows Hand to God poked plenty of fun at religion. But it also made its characters human and showed some empathy for all the ways in which they struggled for salvation. Permission, on the other hand, is all sound and fury signifying very, very little.