The Hi’s and Lo’s of “Grand Concourse,” “The Oldest Boy” and “Our Lady of Kibeho” 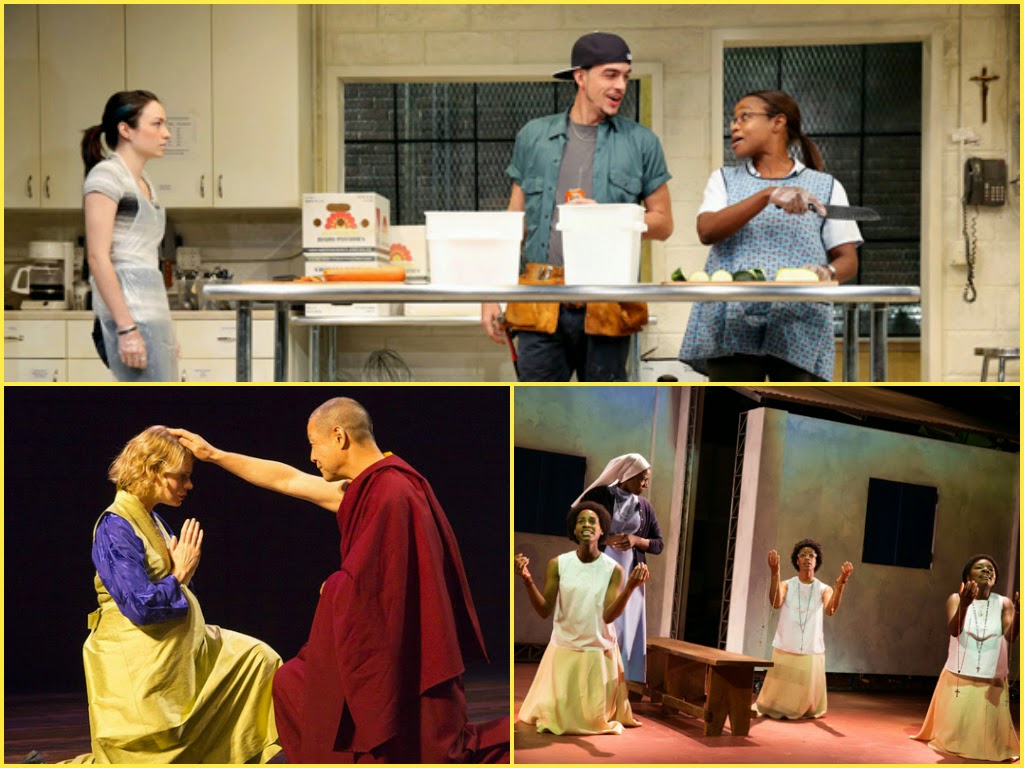 The rush of see-worthy shows continues.
So I’m resorting to another highlights-and-lowlights summary, focusing this time on three intriguing works that deal in varying ways with the limits of faith:

GRAND CONCOURSE. Like all good morality plays, Heidi Schreck’s drama about four people whose lives intersect at a soup kitchen deals with faith, hope, charity and the forgiveness of sins. But Grand Concourse, which is running at Playwrights Horizons through Nov. 30, is also a grand meditation on how some people today have become so obsessed with their own needs that they will undermine even the best efforts of the rest of us as we struggle to come together and help one another.
Highlight: Quincy Tyler Bernstein is the best she’s ever been (which is saying something) as Shelley, the non-habit-wearing nun who runs the kitchen, worries about her lost ability to pray, but still recognizes evil when she sees it.
Lowlight: Only nitpicks not really worth mentioning.

THE OLDEST BOY. The Buddhist belief in reincarnation provides the backdrop for Sarah Ruhl’s family drama about a couple—he’s Tibetan and a devout Buddhist, she a white American and a lapsed Catholic—who are told that their small son is the latest incarnation of a revered spiritual teacher and are asked to give him up to monks who want to raise the boy in their monastery. Playing at Lincoln Center Theater’s Mitzi E. Newhouse Theater through Dec. 28, the play combines elements of both western and eastern theatrical storytelling, from the presence of a Greek chorus to the casting of a Japanese Bunraku puppet as the boy.
Highlight: Director Rebecca Taichman’s gorgeous staging, which uses music, dance and artful lighting, knits together the natural and the metaphysical strands of the play into an almost transcendent whole.
Lowlight: Ruhl raises all kinds of provocative questions about the sanctity of the mother-child bond, the struggle between the individual versus the greater good and the belief in divinity but refuses to develop any of them enough to create dramatic tension, which saps the energy right out of the play.

OUR LADY OF KIBEHO. Inspired by a true story, Katori Hall tells the story of three Rwandan school girls who claimed to see visions of the Virgin Mary and the subsequent turmoil that draws in nearby villagers and even a representative from the Vatican who arrives to determine if the girls are blessed, demon-struck or perpetuating a hoax.
Highlight: The acting, especially from the lead actresses—Nneka Okafor, Mandi Masden, and Joaquina Kalukango—is so achingly authentic that it haunted me for days.
Lowlight: Although director Michael Greif has created some unforgettable moments, including one coup d’theatre that shouldn’t be spoiled, his decision to move several scenes into the audience made it difficult to see and hear everything that was going on.

Labels: Grand Concourse, Our Lady of Kibeho, The Oldest Boy