Why You Should Try to Catch "Falling" 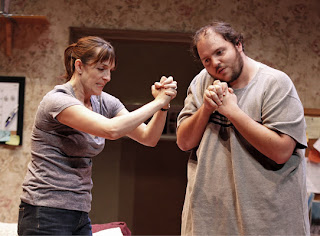 The small Minetta Lane Theatre was less than half full when my theatergoing buddy Bill and I went to see the powerful new play Falling. The poor turnout could have been because it was the week before Christmas and people had other things to do.  Or it could have been because the play is two months into its run and with so many other shows opening since it started, the competition is just too stiff. But I suspect it’s because Falling is such an unflinching look at what it’s like to have a severely autistic child that the word of mouth has been halting.

Seeing it shook me too. But that is precisely why I want to speak up for Falling.  I can’t tell you that it’s the best play currently on the boards (it isn’t) or that you’ll have a great time (you may not) but I can say that I’ve rarely seen a work so totally honest or deeply affecting.

Josh’s parents Tami and Bill have devised a series of intricate rituals to get him through each day but focusing so much on Josh is alienating their other child Lisa and straining their marriage. That’s all brought into stark relief when Bill’s mother Sue arrives for her first visit in three years.

Now, anyone who knows someone with an autistic child or who has read one of the many accounts of raising one is familiar with some version of this story. But playwright Deanna Jent, the mother of an autistic child, paints her version of it with the excruciating specificity of a pointillist.  And she refuses to add the gloss of hopefulness that usually makes these tales easier to take. (Click here to read a Q&A with her).

I have friends and relatives with autistic children and I had thought myself knowledgable about and sympathetic to their situation. But I had never truly felt their anguish until watching Tami go through the conflicting emotions of what Josh’s death might mean for the rest of the family.

It would easy for Falling to turn mawkish but, under the scrupulous direction of Lori Adams, all five members of the cast give impressively unsentimental performances.

Still, special praise has to be saved for Daniel Everidge, who manages to make Josh more than just a collection of tics. And even more must go to Julia Murney, who, even in her silent moments, makes palpable the fierce connection between mother and child.

The producers have announced that Falling will close on Dec. 30.  It’s hard to blame them when the show is selling so few tickets.  And it’s hard to blame the theatergoers who aren’t turning out to see such a heartbreaking show during the feel-good holiday season. Still, it’s a shame because this one is worth seeing.

all true... someone said to me after seeing it that it was "full of hard and full of true."
Hope others can see it next week.