"The Twenty-Seventh Man" is a Bore 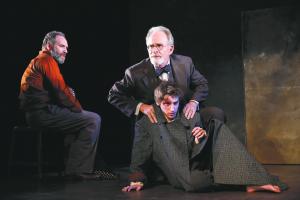 Who would have thunk it?  After years of being dissed, theater has become the place where all the cool kids want to hang out.  A pileup of Hollywood actors— Jake Gyllenhaal, Katie Holmes, Scarlett Johansson and even Tom Hanks—have signed up to do plays in New York this season. And just yesterday it was announced that Shia LaBeouf is teaming up with Alec Baldwin to make his Broadway debut in the upcoming revival of Orphans.

High-profile folks in other genres are getting into the act too. TV host Kathie Lee Gifford wrote the book, lyrics and even some of the music for the short-lived musical Scandalous (so short a life that I didn’t even get a chance to write my review before it closed, although I would have just agreed with the other naysayers). Meanwhile, pop stars Cyndi Lauper and Sheryl Crow have shows coming in this spring.

But, for my money, the coolest of the newcomers is the literary writer Nathan Englander, who has adapted one of his own short stories for his first theatrical outing, The Twenty-Seventh Man, which is ending up its run at The Public Theater on Sunday.

I had read Englander’s most recent collection of short stories, “What We Talk About When We Talk About Anne Frank,” and had been so enchanted by it that I bought tickets for The Twenty-Seventh Man as soon as they went on sale.

What I, and everyone connected with the production, forgot is that what works on the page doesn’t always work on the stage. Englander is a master storyteller and his stories, all dealing with aspects of Jewish life, are both funny and philosophical.  But Englander is a novice playwright who has yet to master the basic concept that you can’t just tell, you have to show. The result is that The Twenty-Seventh Man is static and pedantic.

The original story was inspired by a real-life incident in which a few months before his death in 1953, Josef Stalin ordered the arrests of some of Russia’s most celebrated Jewish poets, novelists, journalists and playwrights.  In Englander’s retelling of the tale, three of the famous writers are put into the same cell.

Although anxious about their fate, the men also find a perverse comfort in their inclusion in the roundup, which they see as confirmation of their literary reputations until a young unknown is thrown in with them. For the next 90 minutes the four men debate art, fame and loyalty.

This is all stuff that usually fascinates me but, as presented in The Twenty-Seventh Man, I couldn’t have cared less about their thoughts on these subjects or even about what would happen to them.

It didn’t have to be that way.  Arthur Miller’s Incident at Vichy tells a similar tale—Jews are rounded up, debate their place in the larger society while they await their fate, are interrogated and judged—but The Actors Company Theatre revival that I saw three years ago was riveting (click here to read my review).

The casts in both productions were accomplished—Daniel Oreskes, Ron Rifkin and Chip Zien play the veteran writers in The Twenty-Seventh Man, with Noah Robbins as the young unknown and Byron Jennings as their interrogator—and the productions were similarly somber in tone and look (muted lights, drab-colored costumes).

The difference is that Miller had written about 20 plays before Incident at Vichy and he knew the grammar of the stage well enough that he could find the dramatic tension and emotional resonance in a group of men just sitting on a bench and bickering with one another.

Englander is a gifted writer too. He told the Jewish Forward that Lincoln Center has already commissioned him to adapt another of his stories for the stage (click here to read that interview).  And so perhaps, if he keeps at it, he, too, will one day create a play as compelling as Miller’s. Which would be really cool. But, alas, this production is tepid at best.