"Heartless" Lives Up to Its Name 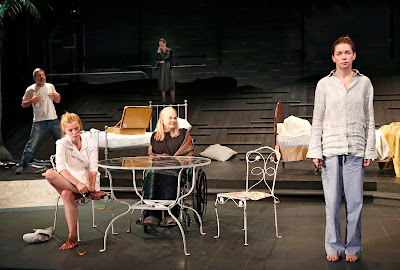 There are some playwrights whose work you can just rear back and enjoy.  And then there are others who force you to sit up in your seat and work.  Sam Shepard has always fallen in the latter category.

Sometimes this call to do battle with a play is welcomed and the struggle to make one’s way through an emotionally or intellectually alien world results in fresh insights about one’s own.  But sometimes it doesn’t and I’m afraid the latter is the case with Heartless, Shepard’s latest play which had its world premiere at the Signature Theatre on Monday night.

I’d sum up the plot but there really doesn’t seem to be one. All that happens is that four women and one man sit in a house that they say is in Los Angeles—but just might be some Sartresque chamber in hell—and take turns declaiming about their unhappiness.

As best as I can figure out, each of them represents some definition of the word heartless: a couple of them have acted selfishly, another craves love, while yet another has literally had to have a heart transplant.

They’re played by a quintet of fine stage actors, lead by the great Lois Smith as a matriarch who is literally hell on wheels.  But they’ve been statically directed by Daniel Aukin and all five seem to have a hard time navigating Eugene Lee’s aggressively symbolic set and the arid emotional landscape that Shepard has laid out for them.

It’s fine—indeed, welcomed—for a play to be challenging but then it seems to me that the director has an extra responsibility to help the theatergoer through it.  That’s what David Esbjornson did with the revelatory production of The Lady from Dubuque that ran at Signature earlier this year (click here to see my review).

Aukin, alas, doesn’t do that with Heartlesss.  Moments of naturalism bump up awkwardly against moments of absurdism.  Encounters that might be amusing fall flat.  Scenes that might be compelling drone on.

“Do you understand what it’s about,” the woman next to me, a psychologist it turned out, asked during intermission.  I shook my head.  “Me neither,” she said.  “But it’s interesting that while he usually deals with men, he has so many women here.”  Which it true. But it doesn't help. It may be a cliché to say it, but Heartless simply doesn't have enough heart.