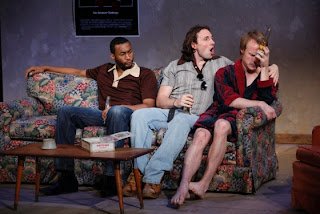 We should all be so lucky as to have a friend as good as Woody Harrelson.  As has now been told many times, Harrelson worked a construction job in the summer of 1983 and became buddies with a black guy named Frankie Hyman. The two lost contact after that summer. Harrelson went on to become a TV and movie star but he never forgot Hyman and periodically tried to track him down, eventually using one of his appearances on Jay Leno’s show to ask if anyone knew his old friend and could help them reconnect.  The plea worked.  The two reunited and eventually decided to write a play about the glory days of their earlier relationship (click here to read more about their back story).  The result is Bullet for Adolf, which is playing at New World Stages through Sept. 9.

Writing, promoting and even directing the play is a lovely thing for Harrelson to have done for Hyman, who seems to have fallen on hard times over the years.  But it turns out to be a lot less lovely for those of us who like plays with believable characters, compelling stories, interesting ideas or actions that make sense.

The plot that Harrelson and Hyman have concocted pivots around the interactions between their old multi-racial construction crew and a Nazi sympathizer whose prized possession is a gun that jammed when someone tried to use it to assassinate Adolf Hitler.

There are tasteless Holocaust jokes, tasteless pedophile jokes and some innocuous but still lame jokes that are most likely to be funny only after one has smoked certain uncontrolled substances, a pursuit for which Harrelson is proudly famous.

Set designer Dane Laffrey hints that the play is supposed to be a farce by including multiple doors.  But neither director Harrelson nor his cast know how to make the best use of them. In fact, nearly everyone onstage overacts like crazy.

David Coomber, who plays a sexually ambiguous guy who shares an apartment with the stand-ins for Harrelson and Hyman, does manage to come up with a few genuinely funny moments but is so amused by his own performance that he soon wears out its welcome.

There are some spotty attempts to deal seriously with race. When the gun is stolen, cops immediately arrest the Frankie character solely because he's black. But that storyline is dropped just like all of the others in the play. Instead there is plenty of pretend dope smoking, some flat-footed passes at romance and copious hip-hop-style use of the n-word.

The only thing that kind of works are video projections that pop up during the long set changes. It's fun to see and remember images of news events and movie and TV clips (including Harrelson’s “Cheers”) from the ‘80s and I groaned inwardly each time they faded out because it meant that Bullet for Adolf was starting up again.

And it wasn’t just me. I was sitting across the aisle from a major critic and happened to look at him at just the moment that he put down his pen and placed his head in his hands in a gesture of abject despair, presumably because we were only in the first act and had another hour to go.

I had planned to end this post by saying something about how Harrelson should keep his day job.  But then I remembered the response of the audience at the performance.

Most howled at the crude jokes.  A few danced to the ‘80s music that played before the show began and during the set changes and intermission.  And nearly all applauded wildly when they heard Harrelson’s voice in the pre-show announcement that is hands-down the best thing about Bullet for Adolf.

Different strokes for different folks, I suppose.  But if you are the kind of folks who value good theater, you should definitely dodge this Bullet.