"Newsies" Dances Its Way Into Your Heart 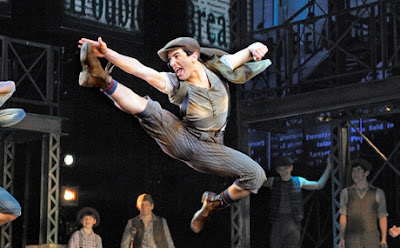 The floor-shaking production numbers in which a supercharged ensemble of male dancers buck, wing and stomp their way across the stage of the Nederlander Theatre are the biggest reason that audiences are cheering Newsies, the new Disney musical that is one of the biggest hits of the spring season.

The New York Times reports that there are “425 leaps or jumps, 372 turns and pirouettes, 133 kicks, 11 tumbling passes and 62 flips” in the show.  And it’s such a thrill to see them that I didn’t mind the rest of Newsies, which has a book by Harvey Fierstein that is only slightly more believable than the one for Spider-Man and a score by Alan Menken and Jack Feldman that stays safely within the wheelhouse of the Broadway sound (the cast album got its official release yesterday).

Like most recent musicals, Newsies is based on a movie. Although that trend has never bothered me as much as it has some people because Broadway has been hijacking commercially-proven stories from other media since Jerome Kern and Oscar Hammerstein set Edna Ferber’s best-selling novel “Show Boat” to music

Ironically, Newsies is based on a 1992 movie musical that flopped at the box office. Its plot is based on an 1899 incident in which boys who sold newspapers on New York City streets went up against the mighty publisher Joseph Pulitzer by going out on strike when he threatened to reduce their already-meager pay.

The boys won. But the movie only found success when it hit the home video market and developed a cult following with tween girls. Among them were my blogger pals Lucky and the Mick at the Craptacular (click here to read about their obsession with it).

My now-grown niece Jennifer was a fan too.  She texted me that she wanted to see Newsies the minute she heard that the show, which drew raves when it played at New Jersey’s Paper Mill Playhouse last summer, was coming to Broadway.

So we went.  And I’m happy to report that Jennifer wasn’t disappointed.  And you probably won’t be either, particularly if you’re looking for a good old-fashioned singing-and-dancing show that, as the barkers used to say, the whole family can enjoy.

Fierstein has kept the basic David-and-Goliath plot but he’s added a girl reporter named Katharine who covers the strike and serves as both a love interest for the head newsboy Jack and a feisty role model for the new generation of tweens who expect a little girl-power feminism to be mixed into their romantic fantasies.

Kara Lindsay, making her Broadway debut, is appropriately plucky as Katharine and sings well.  But it’s Jeremy Jordan who has won the hearts of the young fans who line up each day outside the stage door and the hearts of most critics as well (click here to read some of their raves).

Jordan is indeed charming as Jack. But I have to say I liked him better as Clyde Barrow in Bonnie & Clyde, whose premature closing in December after just 36 performances freed the young up-and-comer to have his second Broadway opening of the season (click here to read about that).

Some folks have been trying to draw parallels between the young strikers in Newsies and the young protesters in the Occupy Wall Street movement and implying that connection is what is driving the show’s success.  But I’m sticking to the belief that it’s the dancing.

Director Jeff Calhoun deserves credit for the overall buoyance of the production but the biggest props have to go to Christopher Gattelli, who just this week beat out a competitive field to win the Outer Critics Circle award for best choreographer.

Gattelli seems to have canvassed his dancers to find out what special things each could do and then built those feats, plus a little extra, into the show’s dance routines (click here to listen to him describe how he created one that's a real showstopper).  Each dancer gets at least one chance to show off and they all do it exuberantly, although I can’t help singling out the uber-amazing Ryan Steele and Alex Wong.

There’s something primal about good dancing that can make the heart thump even when you’re just sitting in your seat and watching it.  My mind wandered during some of Newsie’s book scenes (which is probably why I haven’t said more about the actual story) and my eyes rolled at some of Feirstein’s lame anachronistic jokes but when the newsboys leaped across center stage, my heart soared right along with them.

Wow! This blog is almost identical to what I would say. I'd never seen the movie but many of my friends had. I wanted to see it because I saw clips and it looked great. Plus, I saw Jeremy in "Bonnie and Clyde" and thought he was incredible. I was sad it closed so soon but happy I saw it. The dancing was so amazing in this show. I couldn't keep my eyes off of Ryan Steele. Thanks so much for your input!

Bartley, thanks for sharing your thoughts about the show. Isn't it great the choreographer Christopher Gattelli was recognized. I'm really looking forward to seeing his next show, Dogfight, which opens next month.