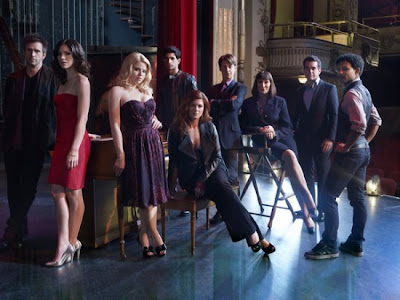 Does it make me a heretic to say that I’m not yet sold on “Smash”?
NBC has certainly done everything it can to push its new series about the making of a Broadway musical, including buying full page ads in The New York Times, doing social media networking up the wazoo and running a big splashy all-stars commercial right before Sunday’s Super Bowl (click here in case you missed it).
According to the Times (click here to read the piece) NBC has spent more than $25 million to persuade people that Broadway can be as cool and water-cooler (or Twitter feed) hip as working in an ad agency in the ‘60s or living in an English manor house around the time of World War I. So it feels almost ungrateful to complain.
Besides, like you, I’ve only seen the pilot. It debuted on Monday night but sneak previews have been available on iTunes, Hulu and YouTube for weeks. And the job of the first episode of any TV series is to introduce the characters and establish the set-up, which “Smash” does well enough.
Its main players include a successful writing team—Julia, who has a cranky husband, a crankier teenage son and, for some unknown reason, is thinking about adopting a baby from China; and Tom, her gay BFF—two ingénues who desperately want the starring role in Tom and Julia’s new musical about Marilyn Monroe; a brilliant but pain-in-the-ass director; and the show’s producer who is in the midst of an acrimonious divorce.
Will Julia’s family adopt the baby?  Will the Broadway chorus kid (played by Broadway’s own Megan Hilty) get the part or will it go to the fresh-faced newcomer (“American Idol” runner-up Katharine McPhee)?  Will the producer’s vengeful husband wage financial warfare that will kill the show?  Will non-show queens in the TV audience care about any of it?
The NBC folks are clearly hoping that “Smash,” complete with fully-staged musical numbers, will catch on the way that “Glee” did.  But I don’t know about that since most of the “Smash” songs will be originals and much of “Glee’s” appeal has been that its songs are familiar ones, allowing viewers at home to get off on seeing how each one is performed—the same dynamic that has worked for ratings champ “American Idol."
Still, it’s hard to recall a series arriving with a stronger pedigree than “Smash” has. NBC’s new honcho-in-chief Robert Greenblatt brought it with him when he made the move from the cable network Showtime and has been endlessly vocal about how much he loves “Smash.”
Hollywood heavyweight Stephen Spielberg is credited with coming up with the original idea for doing a show about Broadway and he hasn’t been shy about his feelings towards “Smash” either (click here to read a Q&A with him).
They’ve hired Theresa Rebeck to run the series and since she’s worked on TV (writing shows like "Law & Order") and in the theater (her latest play Seminar is currently running on Broadway) it would be hard to find someone better suited for the task.  Meanwhile, the Hairspray duo of Marc Shaiman and Scott Wittman is writing those original songs for the show-within-a-show musical.
And in addition to some please-the-general public names like Debra Messing of “Will & Grace” fame as Julia and a sensational Anjelica Huston as the producer (click here to read a profile of her), the “Smash” cast is filled with so many theater vets (Hilty, Christian Borle, Brian D’Arcy James, Michael Cristofer, Will Chase and Wesley Taylor) that the show is almost a full-employment program for Broadway.
Maybe the problem is that my expectations were too high. But “Smash” seems unfocused to me. I want a clear central character—a Don Draper, an Earl of Grantham, a Tony Soprano—around whom all the others can pivot instead of having my attention diverted by a little from this one a little from that one before I've developed an attachment to any of them.
And I don't want so many clichés: the wide-eyed ingénue, the lecherous director, the overly ambitious go-fer. Just one original character would have been nice to have in the mix.
It wouldn’t have been difficult to find one. Spielberg bought the rights to the 1982 novel “Smash” by Garson Kanin, who worked on some 30 Broadway shows including directing the original Funny Girl and writing Born Yesterday and so certainly knew his way not only around backstage but how to tell a good story.
Kanin’s “Smash” chronicles the making of a Broadway musical through the eyes of a smart young production assistant. It’s now out-of-print but it's a romp of a read and I wish Spielberg, Rebeck and the gang had held on to more than its title.
But maybe the actors will put some flesh on the bones of their TV characters and Rebeck and her writers will pull out some surprises as the series develops.
The critics so far have been kind (click here for a round-up of their reviews) and there will be no badmouthing from the New York Post scandalmonger Michael Riedel because Rebeck was smart enough to write him into the show and ask him to play himself, which he's scheduled to do in the third episode (click here to read the back story on that).
The first-night ratings were respectable: about 11.5 million viewers tuned in, earning the show a 4.2 rating (3.8 in the cherished 18-49 demographic), although it did slip to 3.8 (3.4)  in the second half hour.

Meanwhile, however, not only is Playbill doing an overnight recap of the show (click here to read it) but so is The Onion’s AV Film Club (click here to read that) which is definitely cool.
It's hard not to root for the show. As the producer Ken Davenport noted on his blog Monday, “ Imagine what a smash ‘Smash’ would mean to theatergoing and theatermaking all over this country” (click here to read his call to support the show).
So, I’m keeping my fingers crossed (and the show in my Tivo queue) because despite my reservations, I, too, would love it if "Smash" turned out to be must-see TV.

"Does it make me a heretic to say that I’m not yet sold on “Smash”?" Nope. I'm with you. The first episode, which made what would have been two or three months' worth of work appear to take place in a few days, was jarring. The "inside baseball" name-dropping is awkward -- this, from someone who gets all the references. If they're aiming to keep the audience numbers in the hundreds, that's the way to go.

I think it was Alan Sepinwall who said that the third episode was a dud. Caveat whatever is Latin for viewer.

Hey Jon, thanks for commenting and for making me feel a little less lonely.

I agree with just about everything you said but do you think we theater lovers are being too hard on the show? I mean cases don't go to trial as fast as they do on Law & Order and do people really have any idea what all those insidey medical terms mean on shows like House and Gray's Anatomy?

All that aside, I'm really sad to hear about Alan's opinion of the episodes yet to come. It's particularly ironic because I just heard some folks who profess not to like Broadway saying how much they enjoyed the show.

Wouldn't it be a kick-in-the-pants if Smash bypassed the choir (folks like us) and ended up preaching a successful gospel to the philistines?

I personally think Smash has a lot of good qualities and is going to be a great show. I have been a fan of Glee for the past 2 years but I am happy this show came along because the writing for Glee has gotten kind of horrbile lately and i am losing interest in the show.

Thanks for leaving a comment, Janine. I have to confess that I've only watched one episode of Glee. But I sure do hope you're right about Smash.