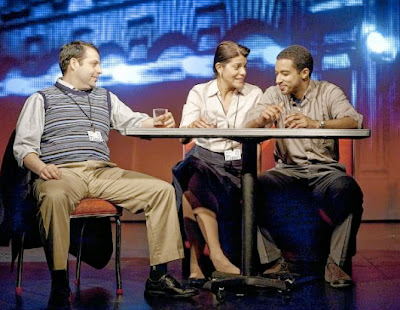 Why write a play unless you have something to say?  The story of Jayson Blair, the young African-American reporter whose fabricated and plagiarized stories set-off a scandal that brought down the top two editors at the New York Times, would seem to offer opportunities to say some interesting things about race, journalism and unbridled ambition.
But CQ/CX, Gabe McKinley's new play about the Blair affair, which opened last week in an Atlantic Theater Company production at the Peter Norton Space, offers no fresh insights about any of those subjects.
I had expected more from the play and from its playwright. And, to be honest, I’m feeling badly about what I’m going to say about both of them because McKinley recently signed up to follow me on Twitter.  I was admittedly flattered and would like to respond in kind. But, as McKinley might say, “veritas est virtus.”
McKinley was working at the Times in 2003 when the Blair scandal broke (click here for the Times’ contemporaneous account of it) and he and Blair used to socialize together. Two of McKinley’s brothers still work at the paper (one used to cover the theater beat) and so he maintains an insider’s knowledge of how the paper works and how journalism is struggling to define itself in the online era.
And yet the play’s problems begin with its overly-cute title. “CQ,” taken from the Latin phrase Caedit Quaestio, which literally means “the question put to the sword,” is supposed to be a well-known copyreader’s term used when a fact is being questioned and “CX” the response when the query has been answered.
But I have to say that I have never seen either used in the many years I’ve worked at some of the country’s top new organizations. And McKinley is just as abstruse when it comes to recounting Blair’s story. For what he has written is simply a series of this-happened-and-then-that-happened scenes that unspool like an old newsreel that is missing some key frames. Like why any of it happened in the first place.
McKinley has slightly camouflaged the names of the major players, albeit not enough to ward off defamation suits if the aggrieved parties chose to make a fuss. Jayson Blair is now Jay Bennett; the Times’ then-editor Howell Raines has become Hal Martin and Raines’ No. 2, Gerald Boyd, the first African-American to make it onto the masthead, is here Gerald Haynes. The paper’s publisher Arthur Sulzberger Jr. is just called Junior.
But they’re all presented more as symbols than as believable people. And because the actors are given no subtext, most of them latch on to characteristics and hit those as hard are they can.  Which in several cases is far too much.
Raines is an Alabama native and had a reputation for being a hard-charging editor but it’s hard to imagine that he was as cornpone and blustery as Arliss Howard makes his doppelgänger out to be. Or that Sulzberger is as much of a namby-pamby as David Pittu’s Junior is.
The cast members playing the lesser-known characters come off better. Steve Rosen and Sheila Tapia are winning as two friends and fellow reporters whom Bennett eventually betrays.  And Larry Bryggman brings a distinctive world-weariness to the small part of an editor who represents the old school of journalism.
But the biggest problem is that McKinley doesn’t really try to explain why Blair did what he did. He's complained in interviews that Blair has never made that clear either.  But isn't it the playwright's job to supply the motivation for his characters? McKinley's failure to do so gives Kobi Libii too little to work with as the Blair stand-in.
McKinley says he spent months interviewing people about the incident and I’ve no doubt that some of those quotes made it into the finished play (click here to read about how he put it together). But while journalism has famously been called the first draft of history, theater should be something more than straight reportage.
Director David Leveaux uses all kinds of trendy stagecraft—flashy video projections, thumping interlude music, abrupt blackouts—to distract the audience away from the dramaturgical potholes.  But it isn’t enough.
The restlessness was palpable the night I saw the show. A few people didn’t return after the intermission.  But one person in the row right behind me seemed to be enjoying himself and laughed loudly at all the jokes. When I turned around, it was McKinley.
It’s OK for a playwright to appreciate his own work and to encourage the actors in it but if he’s the only one getting it, that’s not enough either.

As I told you after we'd both seen this play, on separate occasions, I enjoyed it. Unlike you, I wasn't bothered by the fact that it was basically a straightforward recounting and that it lacked significant revelation of motives. Rather, I was entertained by its literateness (and by what were, for me, grounded, intelligent performances). And perhaps (most of all?) relieved that it had these virtues, following the Atlantic's perplexingly fey Adam Rapp play and its execrable Ethan Coen evening of trivial one acts.
But your post is well argued and persuasive. You've brought me around.