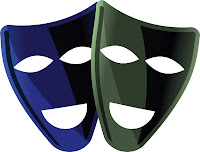 After reading some of my recent posts, a friend told me she was looking forward to seeing me write about something I liked.  She has a point.  For a self-avowed theater lover, I’ve been pretty dyspeptic lately.  Bad mouthing lots of shows and stingy with praise for the few I kind of liked. So this post is devoted entirely to three theater-related things that make me smile:
ALL THE GREAT NEW THEATER BOOKS There’s been so much over the past few months to see and do (I do have a life outside the theater) that I haven’t had time to read all the books that are now threatening to topple over the pile by my bed. The latest additions include: “The Girls of Murder City,” the story of the real murdering women who inspired the musical Chicago; “Showtime,” a new history of Broadway musical theater that starts all the way back with a musical version of Macbeth that played the old Astor Place Opera House in 1849 and “Broadway Musicals: The Biggest Hit and the Biggest Flop of the Season - 1959 to 2009,” the brand new book by the theater know-it-all (and I mean that in a good way) Peter Filichia.
ALL THE TERRIFIC THEATER ACTORS ON TV'S "THE GOOD WIFE" “Law & Order” is no longer around to help Broadway actors pay their rent but this dandy legal drama, now in its second year, has stepped up to fill the gap in a big way.  Just this past week, in the third episode of the season titled “Breaking Fast,” series regular Christine Baranski and Alan Cumming, who has a terrific recurring role as a sly political strategist, were joined by Patrick Breen, Priscilla Lopez, David Pittu, Dallas Roberts, Anika Noni Rose, and Bobby Steggert.  If you recognize at least two of these names, you should definitely put this show in your Tivo queue.
ALL THE FASCINATING MARK BLANKENSHIP COLUMNS FOR TDF STAGES I read a lot of stuff—newspaper and magazine articles, blogs, Facebook pages, Twitter feeds, chatroom postings—about theater but the articles Blankenship writes for the Theater Development Fund’s online magazine always manage to tell me something I didn’t know.  I’ve never met the man but I’m a big fan.