"Lombardi" Acts As Its Own Cheerleader 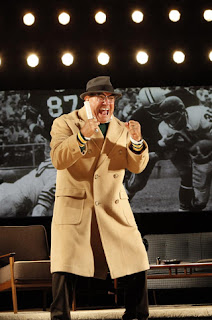 The producers of the new play Lombardi have done everything they can to reach out to their target audience.  And it may be working.  “She really wants to see this play,” the woman sitting next to me told her husband, referring, I assumed, to a friend. “You know, she’s from Green Bay.

Lombardi, just 95 minutes without intermission, as the ushers tell each audience member they show to a seat, is a panegyric to the legendary Green Bay Packers coach Vince Lombardi. The list of its producers include the CEO of a sports marketing firm, a group called the Friends of Lombardi and The National Football League, which apparently hasn’t put up any money but is throwing its considerable marketing muscle behind the show.
In the weeks leading up to Thursday night’s opening, Lombardi has gotten air time on ABC’s “Good Morning America,” Fox TV’s “Sports Extra,” and NPR’s “Only a Game.”  Theater traditionalists can turn up their noses if they like but the strategy seems to be having the desired effect.  I saw at least two men dressed in Packers jerseys at the performance I attended.
The video projections of old Packers games that scroll across the big screens hanging on two sides of the stage area help set the mood. The stadium-like seating at Circle in the Square, whose lobby has been decorated with poster-size photos of Lombardi and players, adds to the feeling that this isn’t your typical show queen fare.
Of course, the only thing most people under-40 probably know about Lombardi is that the Super Bowl trophy is named after him.  But baby boomers will remember his glory days and, as an added inducement to draw them out, the show has cast ‘80s-era TV stars Dan Lauria (“the father on ‘The Wonder Years,’” the woman next to me reminded her husband) as Lombardi and Judith Light, who is probably best known as Tony Danza’s love interest on the old sitcom “Who’s the Boss,” as the coach’s wife Marie.
Unfortunately, there’s not much to the show itself.  Playwright Eric Simonson employs the hoary device of  inventing a young journalist who interviews Lombardi, his wife and star players for a Look magazine profile.  Their answers to his questions supply the exposition and the reporter periodically spiels of the kinds of stats that sports fanatics love. 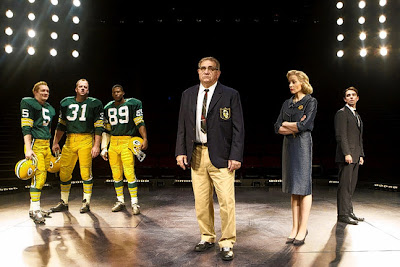 The actors are all fine. Luria looks a lot like the real Lombardi.  Light brings a wry crispness to Marie.  But the characters they’ve been given to play are wafer-thin.  Basically, Lombardi shouts a lot.  While Marie drinks a lot.  The players are based on real Packers but their personalities have been reduced to the randy one, the slow-talking one and the black one. Jokes are predictable and there’s no tension at all. Everyone just loves Lombardi cause, hell, he may be gruff but he’s a great guy.
O.K. I’m sounding snide and more than a little condescending, aren’t I?  Well, in some ways who cares what I think about this show. I’m not its target audience.  The guys wearing the Packers jerseys and a lot of other folks in the audience looked to be having a great time.  Some traditionalists are bound to argue that a show like this has no right taking up space in a Broadway theater.  But who cares what they think. Not every show can have, or needs, a touchdown to score.