The Real Winners and Loser at the Tonys 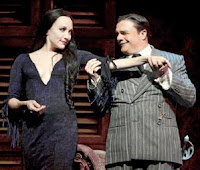 No, it's not Wednesday or Saturday, my usual posting days, but, like every other theater geek, I want to get in my two cents about last night's Tony ceremony.  So here's who I think came off well last night and, alas, who didn't:
Winners: The Addams Family may be far from the best show currently playing on Broadway but its stars are the best of what I love about the theater world.  It would have been gracious enough for Bebe Neuwirth and Nathan Lane to show up at the Tony Awards last night since their show was shut out of the Best Musical category.  But troupers that they are, they actually gave out the awards for Best Performance by a Leading Actor (La Cage Aux Folle's Douglas Hodge got it) and Leading Actress in a Musical (Catherine Zeta-Jones for A Little Night Music) even though neither Lane nor Neuwirth had even been nominated.  Plus the repartee between them was actually funny. They’re truly a class act.

Another Winner:  The great Marian Seldes, who won a Lifetime Achievement Award in a pre-show ceremony that was only shown on the local cable channel NY1, gave the most witty acceptance "speech" I've seen on any awards show ever.  It's not up on YouTube yet but keep an eye out for it.
The Loser: I liked Memphis, which won last night’s big prize for Best Musical but I was rooting for Fela! to take home the prize.  Yet I can’t imagine the folks seeing  Fela! for the first time in last night's TV performance would have any idea of what excited me and so many other people about the show.  The musical excerpts on the Tony broadcast are suppose to serve as ads for their productions and Fela!’s—a confusing hodgepodge of moments from the show instead of any one of its terrific show-stopping numbers—sold itself short.
You can catch up with last night's ceremonies, including photos, videos and, of course, a list of all the winners by clicking here.

Like you, I loved Marian Seldes' marvelous acceptance of her Lifetime Achievement Award. Beautiful and captivating. It was the highlight of the evening, in my humble opinion!