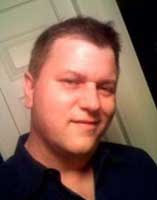 There have been many tragic losses in the theater world over the past couple of months but the latest cuts very close to home for those of us in the theater blogging community.  The news came today that our fellow blogger Patrick Lee has died.

I didn’t know Patrick well. We bloggers tend to communicate mainly through what we write and the occasional get together.  But what I knew of him, I liked immensely. And I'm not alone.  Grieving friends are posting tributes on Patrick's Facebook page and they all confirm that he truly was a kind and generous guy.
Patrick loved theater.  He wrote about shows and showmakers for Theatermania and the Theatre Development Fund among other places. And he was one of the earliest theater bloggers, beginning his blog “Just Shows To Go You” in January, 2006.  The following year, he, Aaron Riccio of That Sounds Cool and their buddy David Bell started an online contest to determine who could see and blog about more shows in a year. They posted their reactions to what they’d seen on Show Showdown, which remains one of the best places to get the lowdown on local theater.

But Patrick didn’t just spout off his opinion, he was also a skilled interviewer (“That’s what I really love to do,” he told me just a few weeks ago) and his exchanges with theater folks are incisive and insightful. He posted the last entry on his site, an interview with Joe Calarco, the director of the new musical The Burnt Part Boys, just a week ago.
For the past two years, Patrick served as the Awards Director of the Independent Theater Bloggers Association, a thankless job made even more so by all kinds of nitpicking by sideliners like me. But Patrick handled all the second guessing with endless patience and grace.  “Questions like yours are so appreciated and will help us all to make this even better next year,” he replied after a barrage of emails from me during this year’s deliberations.  it's unbelievable to think that he won't be around for next year's.

I have, in my opinion, a very talented granddaughter.

She has been on stage from the time she was 4 years old. She has been Dorothy in "The Wizard of Oz", The Narrator in "Joseph and the Amazing Technicolor Dreamcoat", Mary Magdalene in "Jesus Christ Superstar" and Philostrate/Puck in "A Midsummer NIght's Dream".

She attended Simon's Rock College for a year, has taken several night classes at Harvard University and is currently attending Rhode Island College.

She has one CD released and is working on another. She has a music video out on YouTube http://www.youtube.com/watch?v=zMPUGldr_TQ

I would really like to get others opinion on the possibility of a career on Broadway for her.