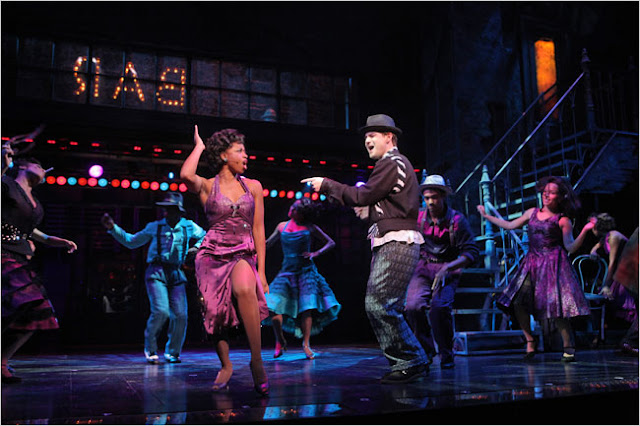 If they gave Miss Congeniality awards on Broadway the way they do in the Miss America Pageant, the new musical Memphis, which opened at the Shubert Theatre on Monday night, would win hands down.  It’s not the best show on Broadway but it’s hard working, audience-friendly and eager to please. Even my notoriously picky husband K liked it.

Memphis also gets points, at least from me, for being a truly original musical—one that isn’t based on a movie or a comic book or a record album. In fact, the veteran producer George W. George, who died two years ago, is prominently credited in the Playbill for the story concept.

The tale George came up with is loosely based on the life of Dewey Phillips, the white Memphis DJ who was one of the first to introduce white audiences to black music on his show back in the ‘50s and the very first to play Elvis Presley on the radio.  Phillips was a local celebrity for nearly a decade and even hosted a local teen dance show but he fell on hard times when most radio stations switched to a Top 40 format.  He died at just 42 after a life of heavy drinking and drug use.

The show embroiders those basic facts with an interracial love story.  The Phillips-inspired character, who's called Huey Calhoun in the show, falls for a beautiful singer he meets while prowling the black blues clubs on the city’s famous Beale Street. In traditional showbiz-story fashion, he promises to make her a star and it’s no spoiler to say that he does. But their love is tested by disapproving relatives (her brother, his mother) racist goons, and their conflicting ambitions (he wants to stay in the south where he’s a big man, she wants to go north where it’s easier for a black woman to make the big time).  Along the way there’s lots of singing and dancing.

The producers—all 30 of them—have poured money into the show. The production, overseen by director Christopher Ashley, looks great. David Gallo’s sets are fluid and clever without calling too much attention to themselves (even the video projections that he co-designed with Shawn Sagady are smartly done).  Same goes for Howell Binkley’s felicitous lighting. And the only word for Paul Tazewell’s period costumes is fabulous.

Alas, the show’s weak links are its book, lyrics and music.  Joe DePietro did the book and co-wrote the lyrics and both kind of resemble a scrapbook of favorite moments from Dreamgirls and Hairspray.  There’s an attempt to add some serious social commentary but there's also a simultaneous reluctance to scare audiences away and that creates lapses and bumpy transitions in the narrative.

The music by David Bryan, of Bon Jovi fame, isn't bad (in fact, the guy sitting in front of me got so into the show’s rousing R&B tunes that he could barely stay in his seat) but there’s nothing distinguishing about the songs either. Not one of them has stuck in my head. And that’s a shame in a musical that’s about music, particularly this paradigm-shattering music.

But all the main characters get their power ballads or character numbers and they all do well by them, especially Chad Kimball who plays Huey and Montego Glover who plays his lady love Felicia (click here to read a Wall Street Journal interview with her).  And the dance numbers, choreographed by Sergio Trujillo, are energetically performed by a large ensemble of talented dancers, although a shout out has to be given to Vivian Nixon, who looks just like her mother Debbie Allen and may be even a better dancer.

So Memphis may not walk away with the crown but it’s got a winning personality. And that counts for a lot. It will also give theatergoers a really good time. And, when all is said and done, that's what really counts most.

My wife and I loved Memphis. I caught Billy Elliot the night before (I had missed it due to flight delays on an earlier trip). No comparison - Memphis comes out on top.

Original story - Billy - no - from a movie and not nearly as well done as the movie. Memphis - original, fresh and well done - the story does a marvelous job of raising the terrible racial tensions of the time without overplaying them. The end of the first act was poignant, but was not overplayed into the second act.

Music - Billy - good, but not great. Memphis - fresh, flowing, music you can dance to, and the ultimate test with my wife, J - she was humming a song the next day.

Dancing - Billy - "Hey, we need a dance number here. And let's put a gigantic ballon of Margaret Thatcher with the puppets and let's put mind-blowing banging of police shields here - contrived. Memphis - dancing comes from the script and the flow of the show. Always part of the story and always exceptional.

Cast - I may have seen a bad night of Billy, but Billy and his Dad were average at best (again I was comparing to the movie). Memphis - Leads are perfect.

Theater goers - make up your own mind.

Ron, thanks for reading B&Me and for leaving such a full and passionate comment. Memphis won't be competing against Billy, which opened last season. And that's fine by me, because I like them both. I hope you'll get a chance to see this season's other new musicals and that you'll stop by to say what you think about them. Albest, jan

It may be flawed, but I liked it, too. Great review Jan.

Thanks, Steve. Glad you had a good time. And I think most folks will.

My friends and I were in NYC last weekend and saw Memphis, it was wonderful. One of the best musicals that I have seen. It is a must see play.

Anonymous, thanks so much for leaving a comment. As you know, the critics were mixed about the show and it seems to be filling only around 70% of its seats. But, as you've experienced, Memphis is a crowd-pleaser and despite my own mixed feelings about it, I hope the show succeeds. In case you missed it, here's a nice article about its two stars that recently ran in the New York Times: http://tinyurl.com/memphisbackground

Your blog keeps getting better and better! Your older articles are not as good as newer ones you have a lot more creativity and originality now keep it up!

Anonymous, thanks for the kind and encouraging words and for being a constant reader.

Amiable brief and this enter helped me alot in my college assignement. Gratefulness you as your information.


hopefully this is just what im looking for looks like i have a lot to read.