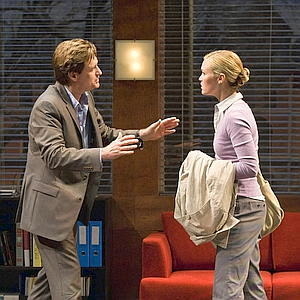 Back in 1992, I had tea with the actor William H. Macy. It was shortly before he was to open in the original production of David Mamet’s he-said-she-said drama Oleanna at the Orpheum Theatre down on Second Avenue.  Macy told me how he and Mamet had met at Goddard College in the late ‘60s.  Over the years, Macy would star in so many Mamet plays that people started calling him the “Mamet Man.”

Macy was ambivalent about the sobriquet and about his career, resigned to never being more than a journeyman stage actor. As film fans now know, he was wrong to doubt himself.  But, at the time, he didn’t have any doubts about Oleanna.  He thought it was a winner. About that, at least as it’s presented in the revival that opened at the Golden Theatre on Sunday night, he may also be wrong.

Oleanna is divided into three tense scenes in which a male professor and a female student meet in his office. By the end of the production with Macy and Mamet's wife Rebecca Pidgeon in the roles, I wanted desperately to rewind the action to hear again not only what had been said but how it had been said.  The play may tend towards the polemical and Mamet's politics may lean towards the right but he is a gifted enough playwright to allow subtext, room for ambiguity. I left the theater shaken, not sure where I stood.  And I wasn’t the only one.  People who saw it—and even those who didn’t—debated the play for weeks.

Comparing productions is unfair and particularly tricky in this case. Because Mamet wrote Oleanna in the red-hot aftermath of the hearings for Clarence Thomas’ confirmation to the Supreme Court that were almost derailed by law professor Anita Hill’s allegations of sexual harassment. People lined up on both sides of that confrontation, the fallout forced the harassment issue into the spotlight and Mamet’s play turned up the heat.

But Thomas has been on the bench for years now.  And harassment is widely acknowledged as bad behavior.  So producers of the current production are trying to provoke a new debate—and ticket sales—by holding regular talkbacks after the performances. But, alas, this new interpretation of the play strips away the subtleties for me.

The missteps start with Neil Patel's set.  It’s beautiful.  Too beautiful.  Oleanna (the name seems to refer to a failed 19th century utopian community)  opens as the professor is waiting to hear that he’s gotten tenure. But the sleek, wood-paneled set looks as though he’s already working as one of the pampered movie moguls in Mamet’s other gender power play Speed-the-Plow.

The usually deft director Doug Hughes makes matters worse by having mechanized Venetian blinds rise and lower at an agonizingly slow—and noisy—pace to signal scene changes.  Couldn’t we have figure out that the scenes were changing on our own?   Couldn’t he have found a more clever way to give the actors time to make their minimal costume changes?

But the biggest problem may be the casting. Julia Stiles, who began acting on the professional stage when she was 12, radiates an intelligence and assuredness that has made her one my favorite young movie actresses (click here to read a short New York magazine piece about her).  But her character Carol should be insecure at the beginning of the play and Stiles bristles with perspicacity right from the start.

Meanwhile, Bill Pullman brings the same finely-tuned hangdog quality to Oleanna that he brought to Edward Albee’s The Goat, or Who Is Sylvia?  Problem is it fit the Albee play perfectly, while it subverts the transformation that Mamet’s requires for his.

I've read that Hughes wanted to create a more naturalistic production. So the actors speak without the rat-a-tat abruptness that we think of us as Mamet-speak.  The director also seems to think that the play's sexual politics may be outdated. So all the sympathy is shifted to one of the characters, which unbalanced the whole thing for me.

Some members in the audience at the performance my friend Priscilla and I attended gasped at moments in the climactic third scene. But I kept looking at my watch and wondering where we'd go for dinner.  It’s hard to enjoy a contest of any kind when the deck is stacked.

First off I would like to thank you for writing this post. Being on the west coast I miss out on all things Broadway. Having been fortunate enough to see a few Broadway shows in my life I understand how much the theatre culture (or lack thereof) in Los Angeles differs from New York. That being said I truly enjoy reading your reviews. Not only are they very articulate and insightful but this one in particular provided history and context highly relevant to the play that quite frankly I did not know. Yet the most appealing aspect of your blog is that the reviews are real. This may sound strange but I have read plenty of reviews that give every play star studded reviews. Even though this particular review was not covered in stars, comparing the William H. Macy production with the current one, though tricky as you put it, helped highlight the fact that while this current production was underwhelming it is still a play worth seeing in the future.

Being fairly new to the blogosphere I do not nearly as much experience as you do but I have two suggestions which you may take or leave as you will. The one thing I think would really add to your blog would be more links. I personally follow every link that I find in blogs and when done right it helps expand the reader’s understanding on that particular subject or issue. The links you did include I found very interesting and more like them would give your posts, in my opinion, another dimension. Also, and this may seem small, but personally I would like to know if the show are Broadway or Off Broadway. This distinction may not seem important or even relevant but for me when I hear of a play that is off Broadway becoming a sensation and making it to a major Broadway theatre I feel a sense of pride. It’s funny I know but I love underdog stories. All in all I am confident that I will visit you sight weekly and would appreciate any advice or criticisms you have for me regarding my fledgling blog.

Sean, many thanks for your very kind words about B&Me. I appreciate your suggestions too. I’m going to think about how to do a better job of working in whether the shows are on or off Broadway. I try to indicate where shows are playing by naming the theaters when they’re on Broadway and citing the nonprofit theater companies that produce them when they’re off-Broadway. But that approach may not be as helpful for folks who don’t live in New York. As for the links, I’m glad you found the ones in this post helpful. I’d like to include more but I want them to be informative and that makes them difficult to find. I'll try to think about other ways to do that too. In the meantime, I hope you will keep reading B&Me and, when you have a chance, do send the name of your blog because I’d love to take a look at it. Albest, jan

Hiya im fresh on here. I came accross this site I find It extremely accessible and it's helped me out alot. I should be able to give something back and support other people like it has helped me.

Thank You, Catch You About.

Howdy im fresh here. I came accross this forum I find It truly helpful & it has helped me out a lot. I should be able to contribute and support others like its helped me.

Cheers, See You Around

Hi i am fresh to this, I hit upon this board I have found It positively helpful & it has helped me out a great deal. I hope to contribute & support other people like its helped me.

Thank's, Catch You Around.